The installation in the external loggia is visible free of charge.

On the occasion of the eighteenth edition of the Contemporary Day promoted by AMACI – Association of Italian Contemporary Art Museums, on Saturday 8 October the Museo Novecento in collaboration with Frittelli contemporary art and with the Galleria Tiziana di Caro, presents the installation of the work of Tomaso Binga, PAX.

Artist, poet and performer, Tomaso Binga, aka Bianca Pucciarelli Menna, brings to the Museo Novecento not only a work of art, but a thought, a wish and above all an urgency that stands out on the external facade of the former Leopoldine.

PAX in fact refers to the series of the mural Alphabet (1976), otherwise known as Living Scripture, which the artist had created in the Tuscan capital, with the help of his friend, artist and photographer, Verita Monselles. The series, consisting of 26 images that immortalize Tomaso Binga as he composes the letters of the alphabet with his naked body, is conceived in close relationship with previous experiments on the materiality of words. For months, the artist had to attend the Florentine studio of Verita Monselles, trying and retrying each pose to be able to create this work that is now one of the best known of the feminist art season of the seventies. 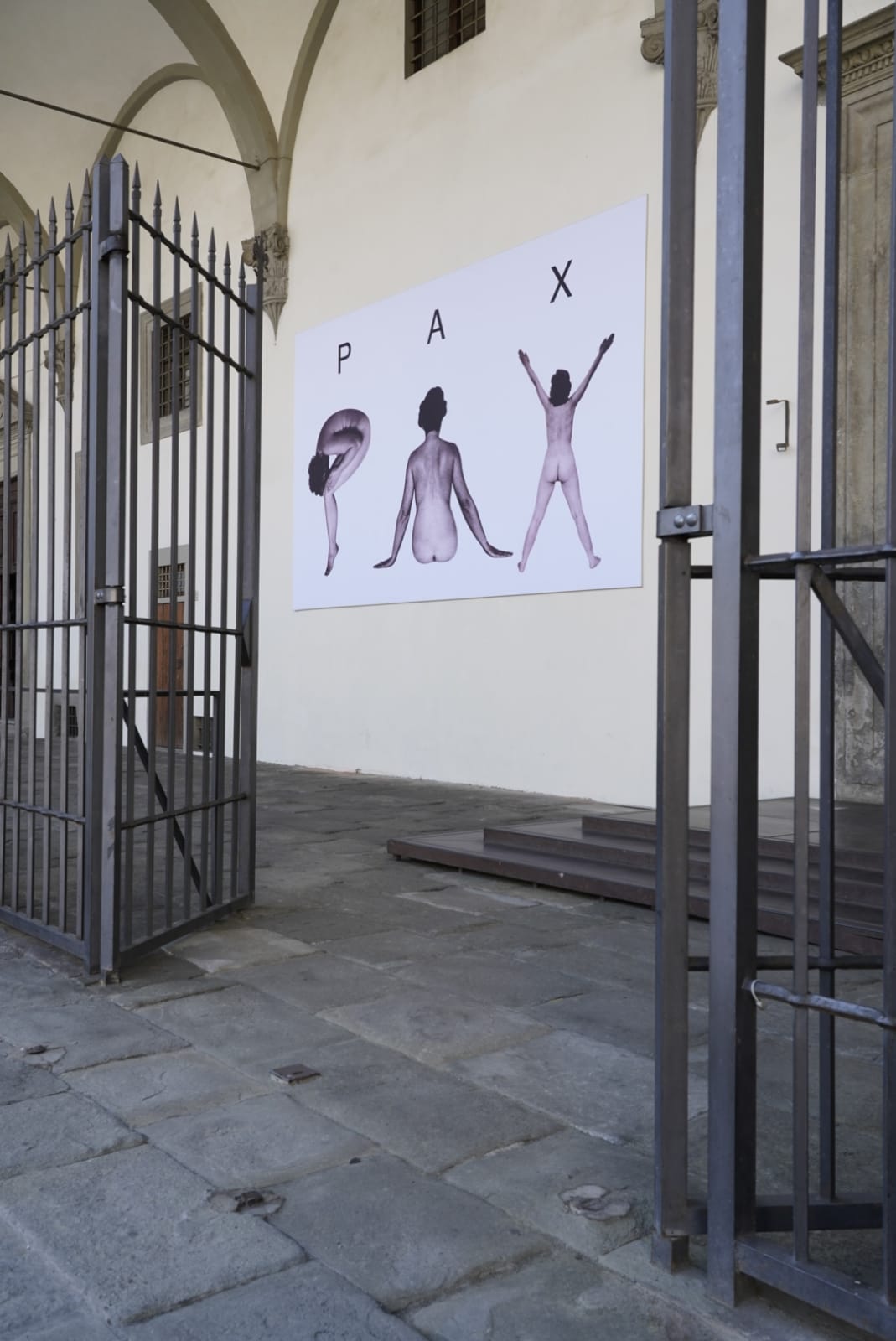 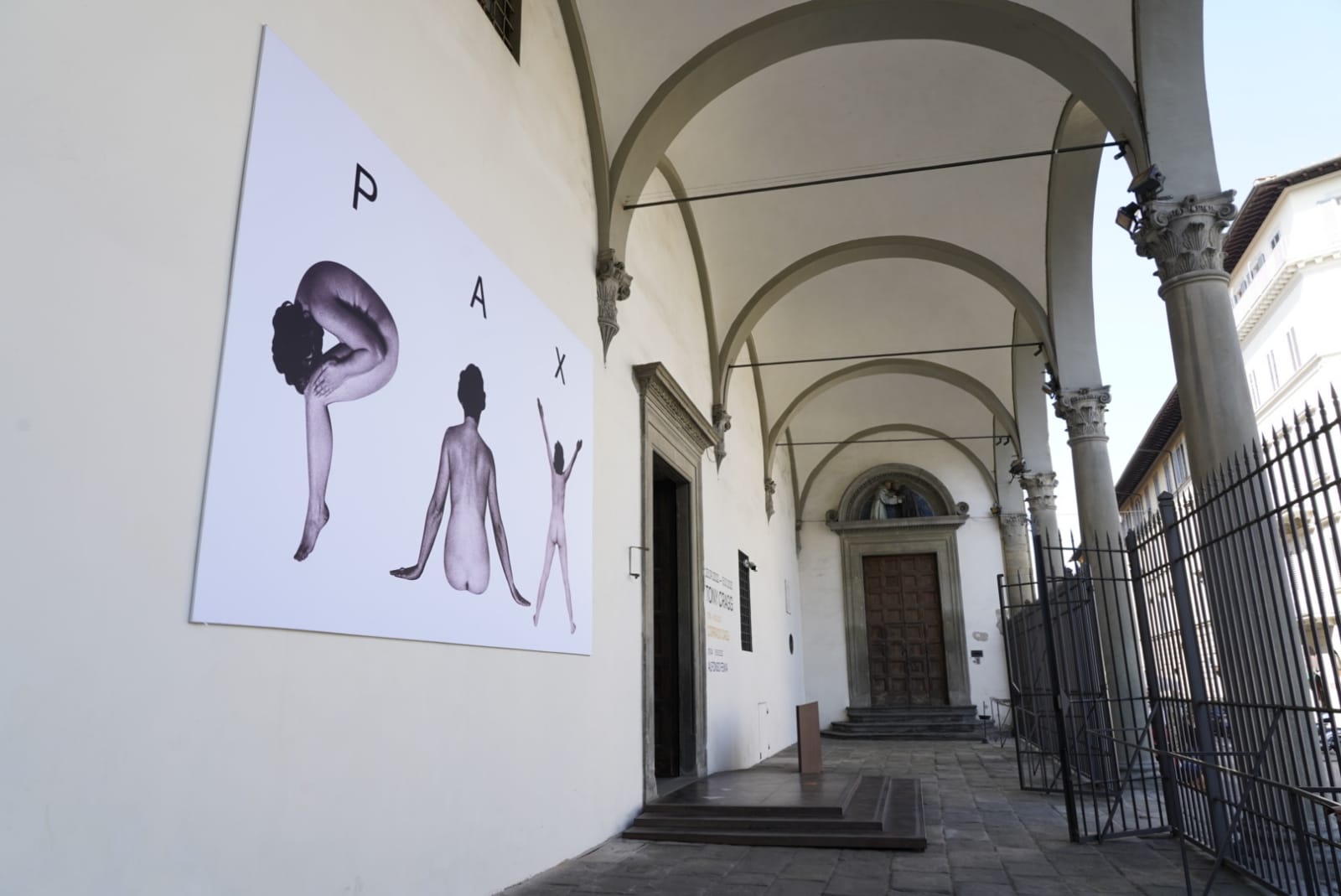 In a historical moment in which the world is shaken by wars and more than ever, multiple acts of violence (ideological and otherwise) against women are on the agenda, the Museo Novecento is confirmed as an institution sensibly tuned to emergencies and tragic conflicts of our time. In this sense, the PAX installation takes on a powerful and dual value. On the one hand, the cry of all humanity for hatred to subside and conflicts to settle down; on the other hand, in continuity with the ideas developed by the feminist movements, the work of Tomaso Binga represents the request for peace for all women harassed, trapped, killed by men and regimes, and at the same time it is a cry for freedom, affirmation the right of women to regain possession of language, their identity and their body, to think and represent themselves as active subjects of history. “We no longer want to feel like abstract entities, but physically, socially, politically human people,” says Binga. A thought that is certainly a mirror of the slogan that is burning the streets of Iran these days, “Woman, life, freedom”, and that echoes in the squares all over the world.

It should also be remembered that on the occasion of the Giornata del Contemporaneo, Saturday 8 October there are two special activities by reservation that MUS.E offers free of charge at the Museo Novecento: the first, at 3 pm, includes a guided tour of the exhibition Tony Cragg. Transfer (for young people and adults), which will allow you to better appreciate the exhibition and some of the most significant works of the famous British sculptor. Second appointment at 4:30 pm with Infinite Forms. Infinite metamorphosis (for children aged 6 to 12), an activity that will allow you to deepen the aspects of Tony Cragg’s poetics and to appreciate his works closely, and then trigger an art atelier in which to experiment the creative possibilities of drawing in key entirely personal. For info and reservations contact: info@musefirenze.it