The ticket office closes one hour before the museum closes.

The ticket office closes one hour before the museum closes.

After the great monographic retrospectives by John Currin and Glenn Brown, the rooms of the Bardini Museum in Florence from 26 January to 25 March will host Senza Data, a solo exhibition by Luca Pignatelli (Milan, 1962) curated by Sergio Risaliti. Promoted by the Municipality of Florence, organized by MUS.E and in collaboration with the Poggiali Gallery of Florence, the event launches a new cycle of exhibitions conceived with the scientific care of the Museo Novecento and created outside the museum spaces of Piazza Santa Maria Novella.

A little over three years after “Migranti”, his personal exhibition in the Sala del Camino of the Uffizi Gallery, Luca Pignatelli returns to Florence for another exhibition event that testifies to the repeated crossing of historical time made by his art in the opposite direction than those who cite the past with academic nostalgia. A series of works on railway tarpaulin, wood, paper and sheet metal will be exhibited in the rooms of the Bardini, together with large paintings made on Persian carpets from the early twentieth century. These latest productions by the artist will be coherently associated with the vast and relevant collection of carpets of the Museum itself from the 15th century to the present day, including a textile artefact of over seven meters used on the occasion of Hitler’s visit to Florence in 1938. A new series of works on paper they will also come. exhibited in a site-specific setting that will involve the frames and furnishings present in the Museum’s collection. 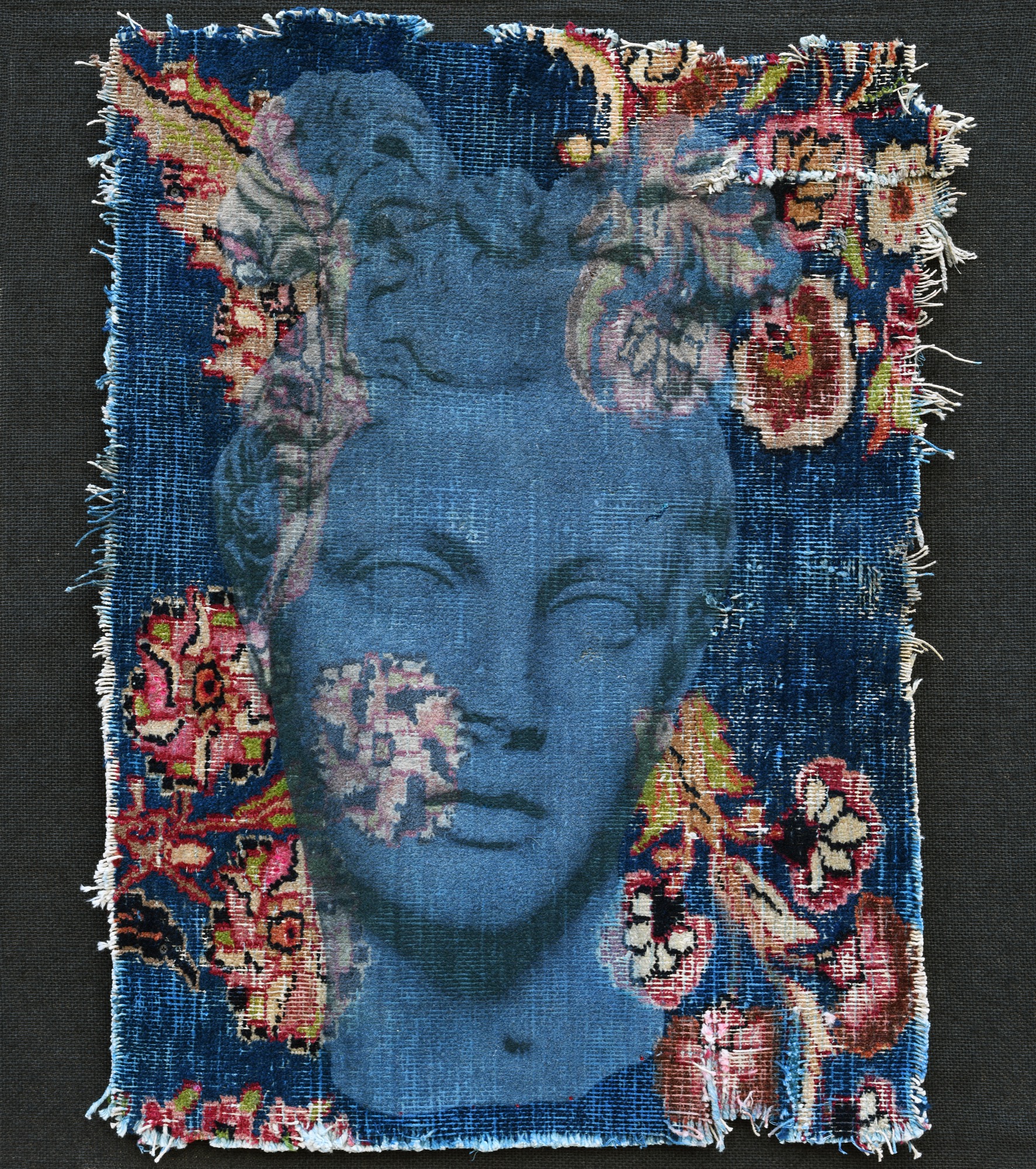 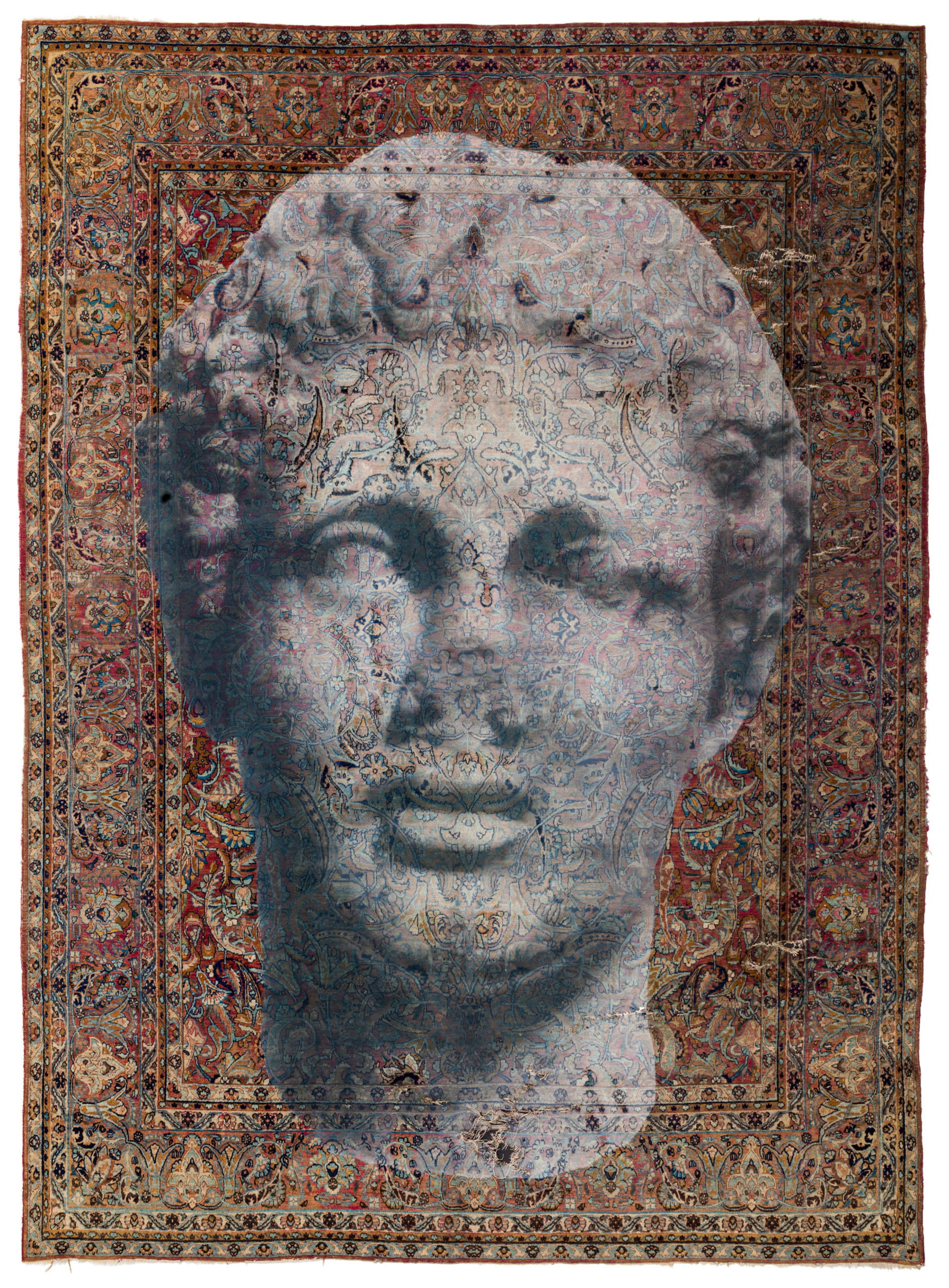 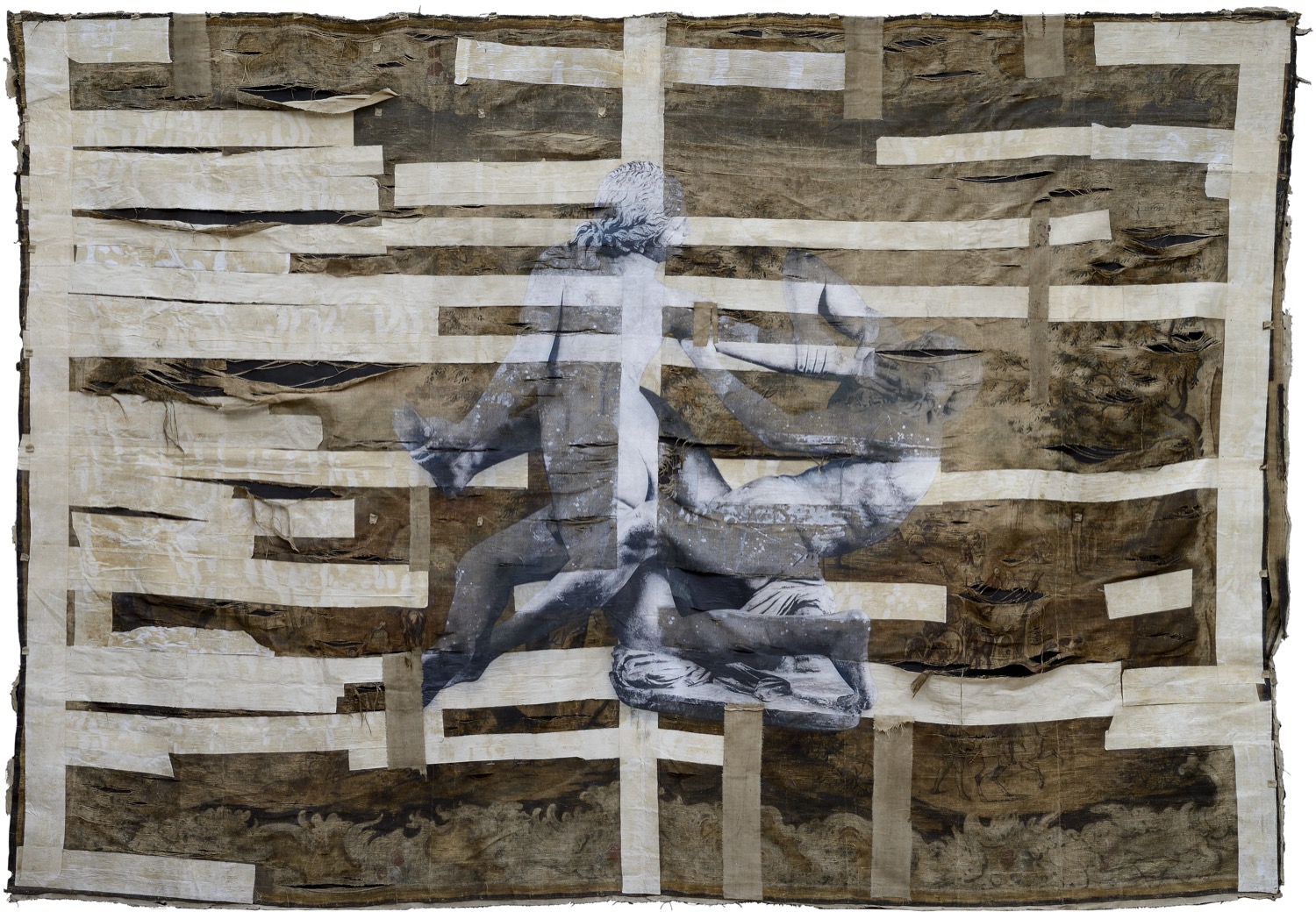 “My research in recent years – says the artist – is a rethinking what time is with respect to the image, to the paintings. I believe that today it is important to place the image at the center of a reflection on memory and the Bardini museum is a symbol in the world of what it means to have a collection capable of representing a stratification of times but also of cultures. With this exhibition I would like to answer the question: what is in front of an image? For me it is a plural time, a montage of temporariness, staggered and therefore different”.

Pignatelli’s paintings house at the center a varied antiquarian iconographic material that, torn from oblivion or fossilization, from commercialization and fetishism, returns in a language of the present the very experience of classicism, as if that civilization had never vanished, or passed away, but was a real presence among the images circulating among us.

In other words, his images are those of a classicism that is always alive and present that does not speak the silent, inanimate language of the copy. Those of his figures placed in the center of the space of representation live a time that repeats itself identical to their original and immediately enter into communication with our changing being, becoming, passing away.

A classicism that integrates and also includes the archeology of the modern, with its metropolises, its steam engines, those flying in dark skies, large ships that ply the oceans. One gets the impression that Pignatelli knows how to take images from iconographic repertoires to isolate icons, figures that have the strength of real archetypes of the collective unconscious, which are deposited not only in our visual memory, but in our feelings, in our emotions. Like warplanes that cross historical time and transform the nightmare of war tragedy into something that is still present. Or the New York skyline, a piece of our sentimental mythology that belongs to all of us, in a collective mnemonic superimposition, which is that of cinema and photography, news and entertainment.

In Pignatelli’s paintings, the ‘heads’ of the Greek or Roman age often have their eyes closed, they are introverted, they leave everything in suspense, making us feel only the echo of grandiose, immense emotions, of something infinite and timeless. For Pignatelli, evoking classicism, even that of modernism, can mean alluding to something immeasurable, making room for a desire for greatness and vastness that has something sublime. We recognize in all this feeling, reliving, a neo-romantic experience of nostalgia that is dramatized by the use of poor or industrial supports, also full of memory, for a dialectic between signs and materials that cannot be reduced to mere suggestion. linguistic or cynical quote. A feeling of admiration and nostalgia for classicism and modernism with its illusions and tragedies that is not so much turned towards monumentality to name its rhetorical form but lives on a desire for beauty that memory reveals to the contemporary subject when it knows rediscover the time of active contemplation. 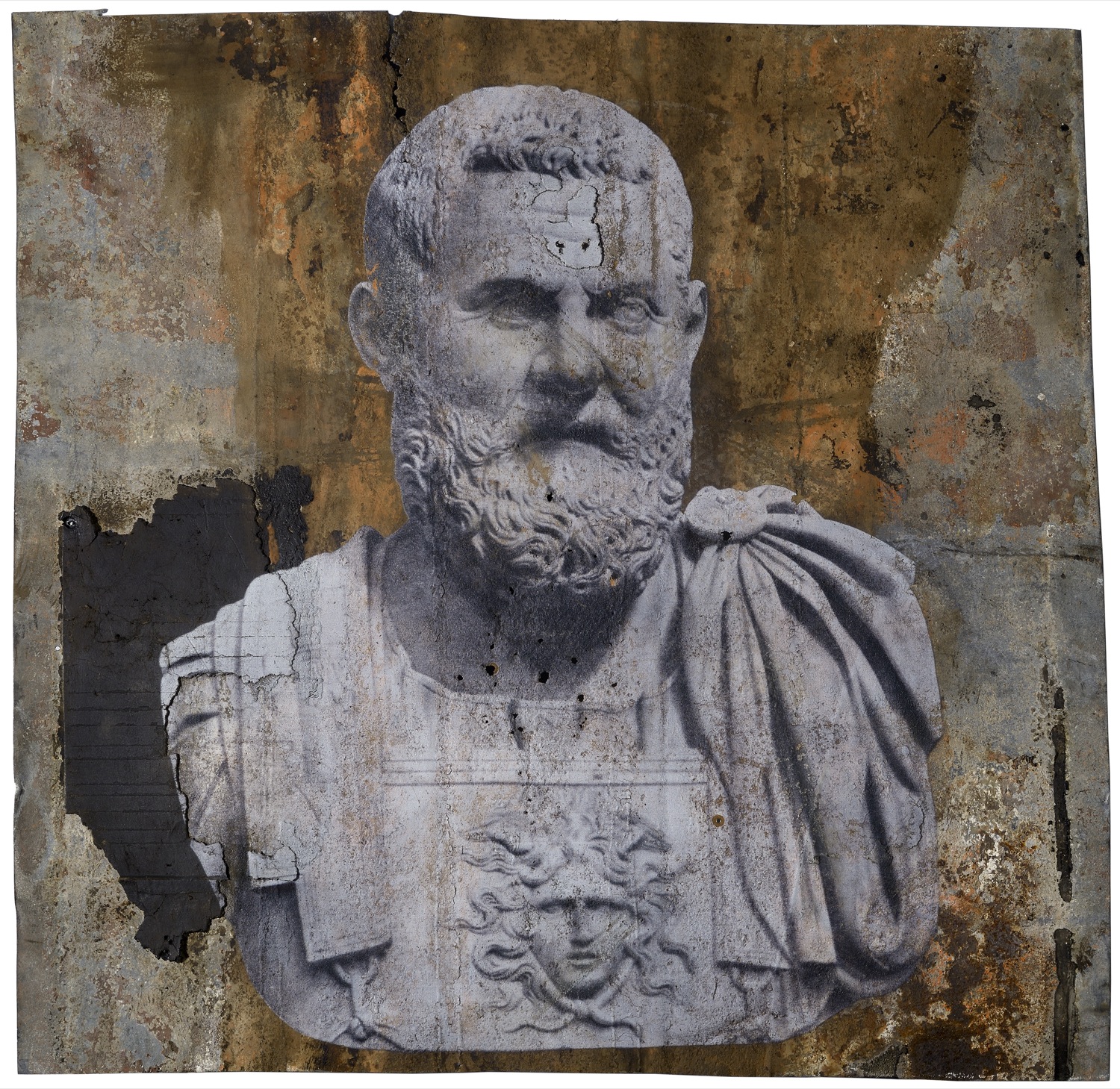 Dialogue in the museum

Also on the occasion of the “Senza date” exhibition, as has already happened in the previous exhibitions by Currin and Brown, the works of Luca Pignatelli will dialogue with the art collections of the Stefano Bardini museum, known throughout the world for the peculiar staging of the antiques collection belonged to the great Florentine merchant and collector between the end of the nineteenth century and the beginning of the twentieth century. An eclectic spirit pervades, in fact, the museum environments, so full of charm, where the objects live in a variegated ensemble of major and minor arts, of Roman, medieval and Renaissance art.

Another characteristic note of the environment is the color called “Bardini blue” which is the background to the artifacts, a tone of color identified by the Florentine collector on his travels to Russia, a noble and warm ‘monochrome’ that later emerged in the interior design of museums and private galleries.

The Museum preserves masterpieces from different eras, such as the Charity by Tino da Camaino, two works by Donatello (the Madonna della mela and the Madonna dei Cordai), as well as paintings of extraordinary quality such as the monumental Crucifix painted by Bernardo Daddi, the San Michele Arcangelo del Pollaiolo, the Night with Aurora and a cupid by Giovanni da San Giovanni, the Atlas by Giovanni Francesco Barbieri known as Guercino. This treasure includes a series of drawings by Tiepolo, Giambattista and his sons Lorenzo and Domenico, by Piazzetta, sublime figures in polychrome terracotta and a remarkable collection of carpets and weapons. A gallery that seduces the most refined and cultured artists of our time.

A color catalog will be published by Forma edizioni with an essay by Sergio Risaliti and the conversation between Luca Pignatelli and Pierluigi Panza.