Online booking is recommended on the official website of the ticket office bigliettimusei.comune.fi.it

For information on days and opening times comune.cultura@comune.fi.it

Up to 18 years; groups of students and their teachers; tourist guides, enrolled in the 2016 Tourist Guide Course and interpreters; disabled people and their carers; ICOM, ICOMOS and ICCROM members. School groups: it is necessary to present the list of names on the school's headed paper

On the occasion of May 1st, International Workers’ Day, the Municipality of Florence – Museo Novecento, thanks to the collaboration with the Municipality of Milan, presents in the heart of Palazzo Vecchio, inside the Salone dei Cinquecento, the large canvas by Pelizza da Volpedo Il Quarto Stato (1898-1902), one of the most famous pictorial works created between the nineteenth and twentieth centuries, exceptionally on loan from the Museo del Novecento in Milan.

The project stems from the fruitful relationship between the two cities, which had already begun on the occasion of the exhibition dedicated to the Three Pietà by Michelangelo in progress at the Museo dellOpera del Duomo in Florence. The presentation of the large canvas in the seat of the city government, curated by Danka Giacon and Sergio Risaliti, constitutes a unique opportunity to admire in the Tuscan capital the masterpiece of Pellizza da Volpedo, which bursts with its profound political and social significance to the interior of the Renaissance scenery that adorns the monumental Salone dei Cinquecento.

Acquired by the Municipality of Milan in 1920, thanks to a fundraiser promoted by the socialist mayor Emilio Caldara, Il Quarto Stato has been exhibited at Palazzo Marino, at the Gallery of Modern Art and since 2010 it has been kept at the Museo del Novecento in Milan. The result of a ten-year creative process, the work represents a universally known figurative archetype that expresses the world of work with realistic and expressive power, recalling issues related to the struggles for rights and constitutional principles.

The presence of the work in Florence also finds its historical-artistic justification precisely in the biographical events of the artist who stayed here attending the Academy of Fine Arts, under the teaching of Giovanni Fattori, coming into contact with the masterpieces of the past and studying modern artistic techniques.

The first sketch of the work on the theme of the strike (Ambassadors of hunger) dates back to 1891 and was already set in the square of his native Volpedo. Later, through numerous studies and variations, the artist arrived between 1895 and 1896 in a troubled intermediate version (Fiumana), now in the Brera Art Gallery. Pellizza, dissatisfied with Fiumana and in search of greater pictorial objectivity, started again, in 1898, thinking of a new canvas, The journey of the workers, which reduced the number of figures in the background, and by increasing the size of the support he brought the characters in the foreground closer together. to the viewer making them more monumental and realistic. Pellizza embraces the idea of ​​Max Nordau, expressed in the aphorism “art must give the people a portrait of him but embellished”.

The Fourth Estate was presented to the public for the first time in 1902 at the International Exhibition of Modern Decorative Art in Turin. The hopes of the artist, who was thinking of a direct acquisition, were soon disillusioned: the work in fact will not be understood, but rather decoded as a scene of revolt or strike and therefore repulsed by the right-thinking and political authorities.
The painting represents a response to the bloody Milanese events of 1898 (when, during the popular uprisings, General Bava Beccaris fired at the crowd causing a massacre) and is deeply affected by the humanitarian and evolutionary socialism matured over time by the artist.
The crowd is no longer portrayed in a moment of peaceful protest but confidently advancing towards a more serene future. The “fourth estate”, to which the title refers, is the working class which is represented through scenographic realism. 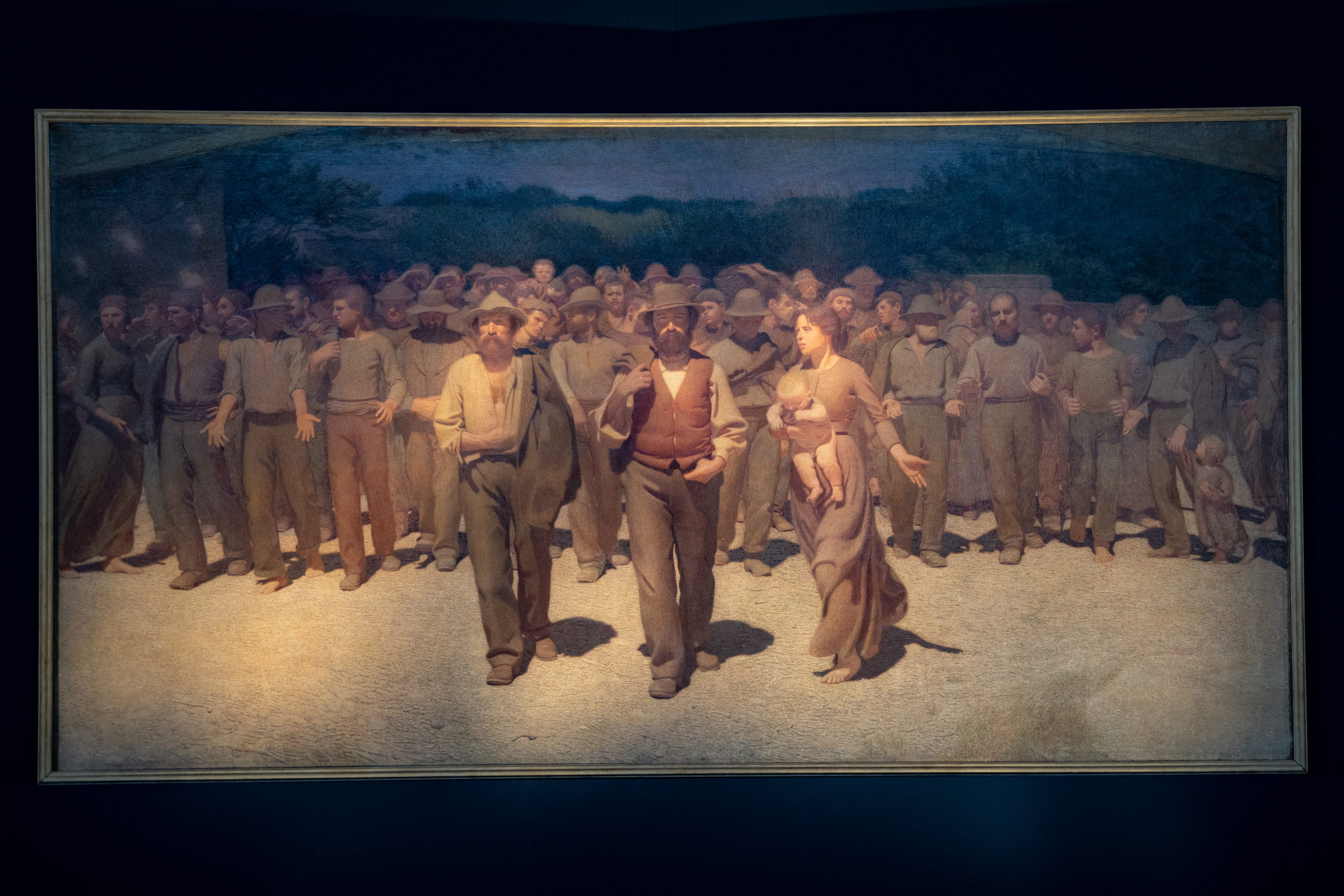 In the work, the figures, studied from life, symbolize the strength and utopian spirit of the work. Among them there are also women, mothers and children, who represent the desire to change the future by assigning women an equally central role in political and social demands. The attention to gestures is evident and profound, the proximity of the bodies gives a compactness value to the march and to the ideal that moves it. Pellizza, in fact, managed to combine an indirect observation of the mass of peasants, transfiguring them according to the previous model of Raphael’s School of Athens, whose iconic expressiveness we discover in the figures in the front line.

With The Fourth Estate the work no longer seeks the acceptance of bourgeois taste, but seeks to communicate the political and social urgency of the subject, using a modern executive technique, which reinterprets the ways of French pointillism.

After the discomforting debut in 1902, the work returned to be talked about on various occasions: the first during the workers’ strikes after the victory of the radical socialists in the political elections of November 1919 in Milan, a year before the purchase of the work. by the municipality of Milan. The second, when during the drafting of the first catalog in 1935, with some embarrassment for the subject, the work is described as “two men and a woman with a child in their arms”.

The work became iconic following the association of the great painting with a renewed social utopia, often celebrated during the May Day events. Finally, among the tributes paid to this highly representative canvas, we can mention the splendid long shot-sequence placed at the background of the opening credits of the movie Novecento by Bernardo Bertolucci (1974). 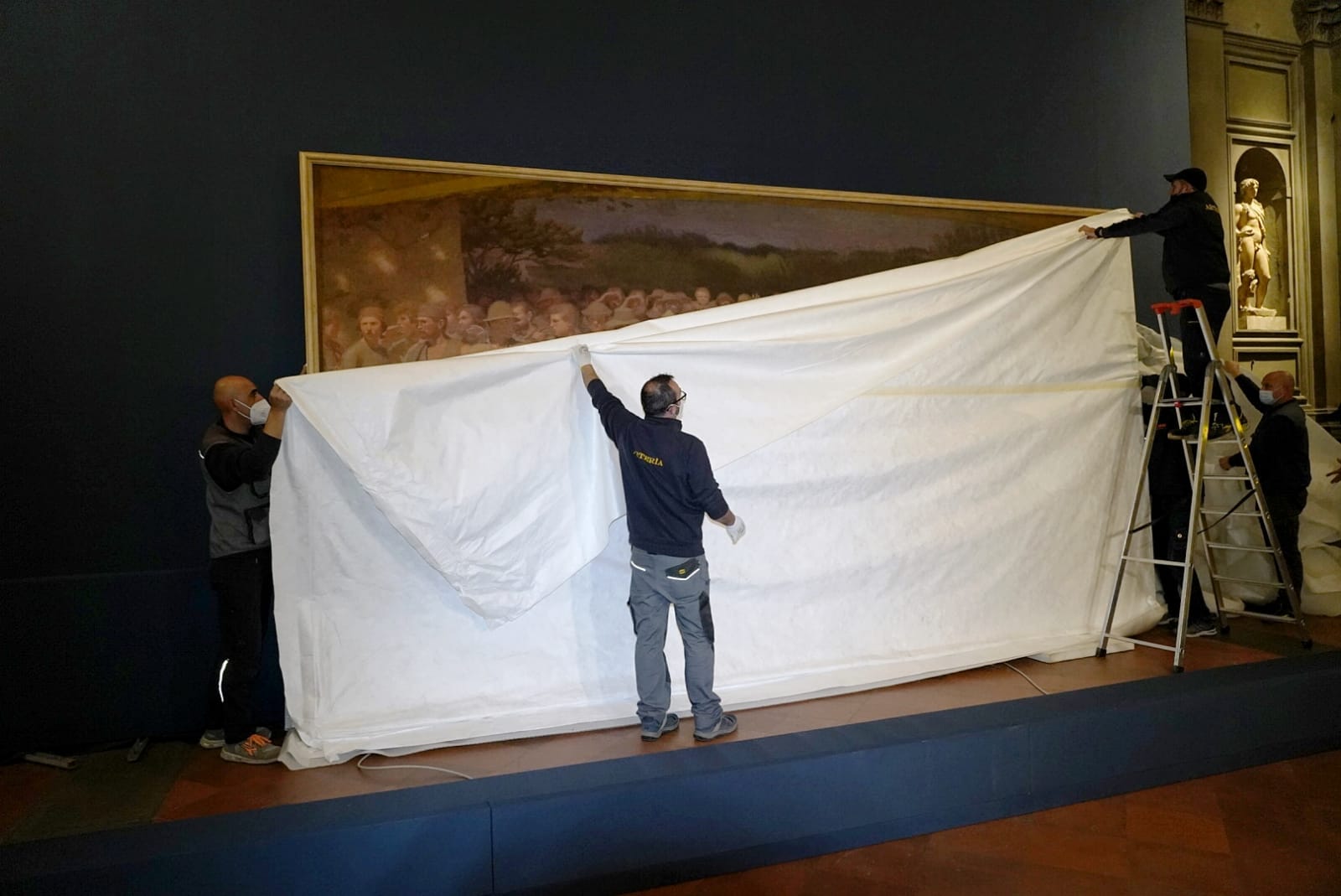 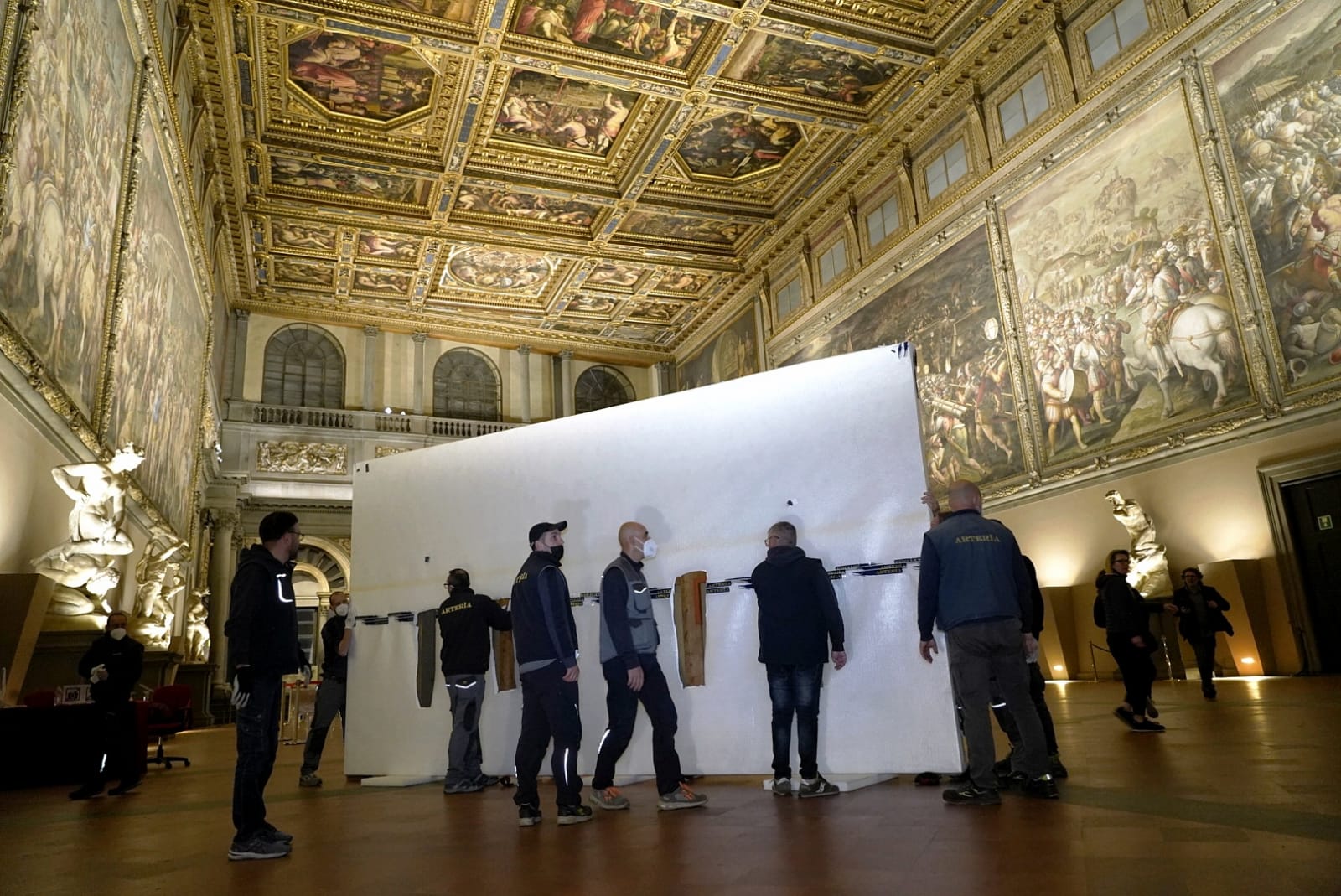 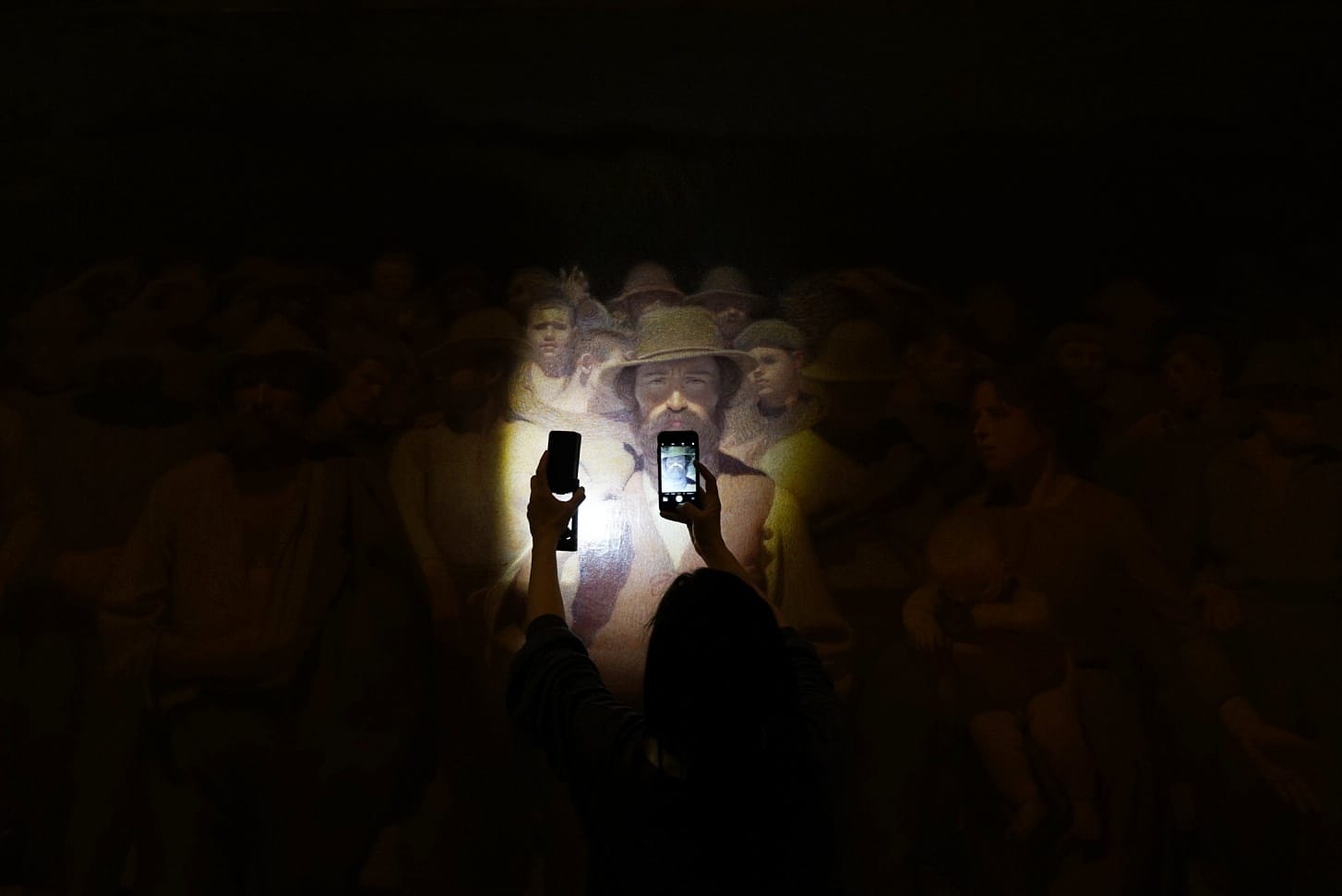 With The Fourth Estate, for the Italian figurative civilization, the era of the ambitious planned work of art ends, an era under the sign of protest begins. The work aims to communicate the urgency of the contents also through a projective and modern executive technique. In The Fourth Estate, and in its many previous versions, the crowd marches towards a future of progress and redemption. Today, as then, the message of strength and hope emanated by Pellizza da Volpedo’s masterpiece shines with a new light, under the banner of the renewed values ​​of cooperation and freedom.

(Volpedo 1868 – ivi 1907) he exhibited for the first time in Brera in 1885. After completing his Milanese studies, he decided to continue his training by going to Rome, first at the Academy of San Luca, then at the free nude school at the French Academy at Villa Medici. Disappointed by Rome, he left the city earlier than expected to go to Florence in 1893, where he attended the Academy of Fine Arts as a student of Giovanni Fattori and where he remained until 1895. It was in the Tuscan capital that he experimented with the Divisionist technique, based on the division of colors through the use of small dots or strokes. The following date back to this period: Il Sole, Prato fiorito, Il Morticino, in which you can appreciate the powdery treatment of color and matter, which we also find in the masterpiece Il Quarto Stato. In the Tuscan city, the artist comes into contact with techniques and suggestions that prompt him to begin the gestation of the work that still makes him famous in the world today. In fact, in 1895 he created an oil sketch that will lead to the final draft of the work through which the artist, attentive to social issues, will consecrate social realism. 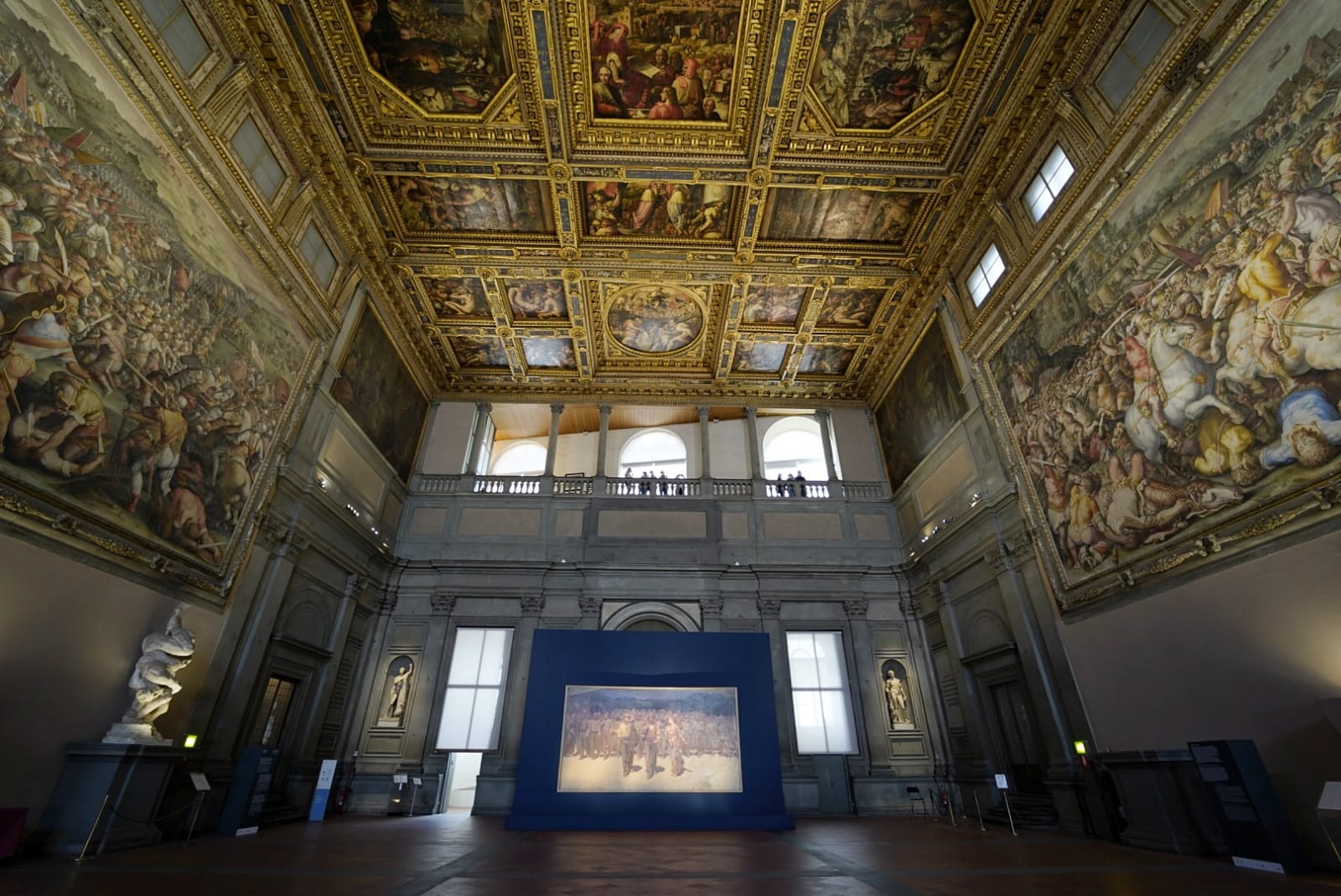 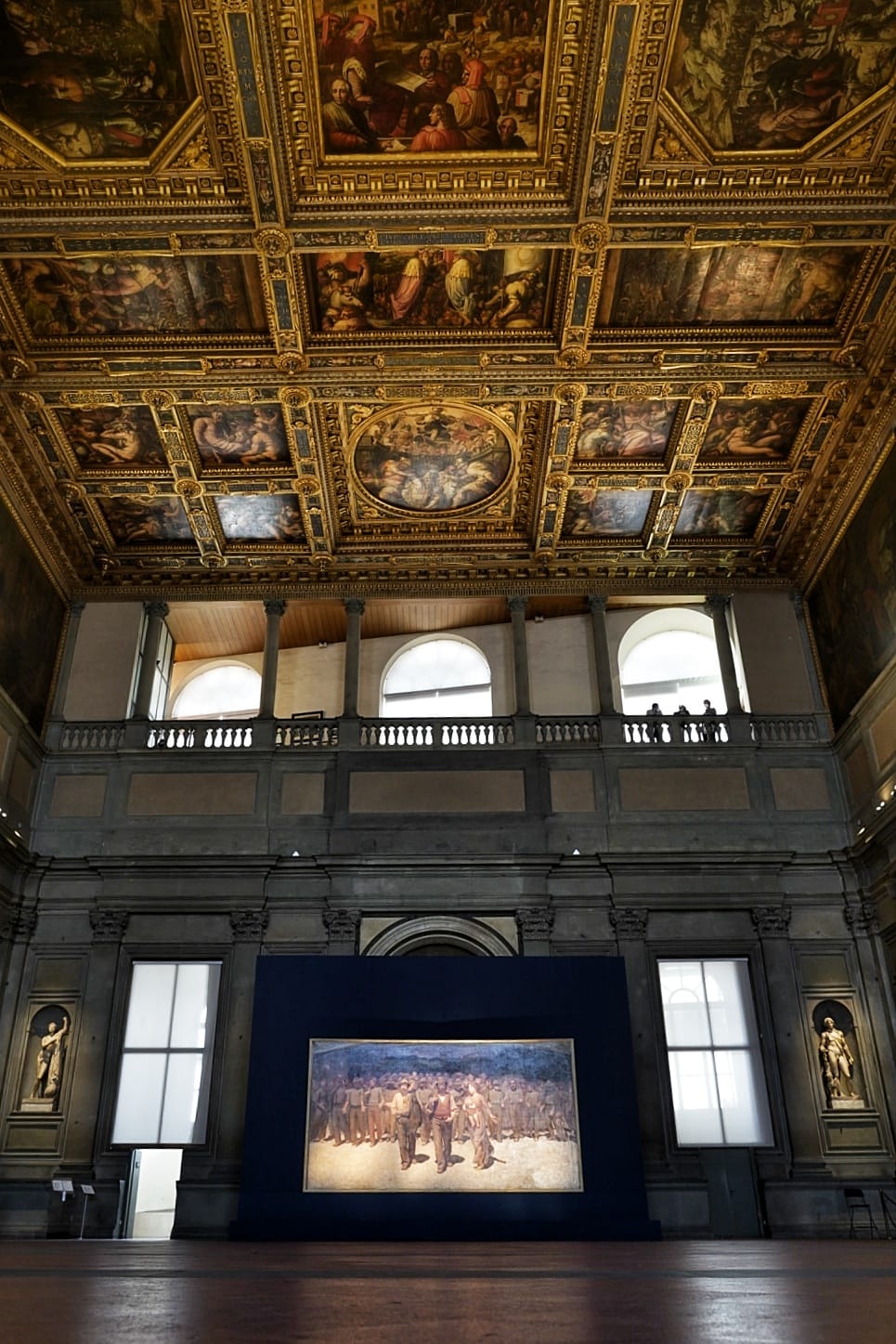 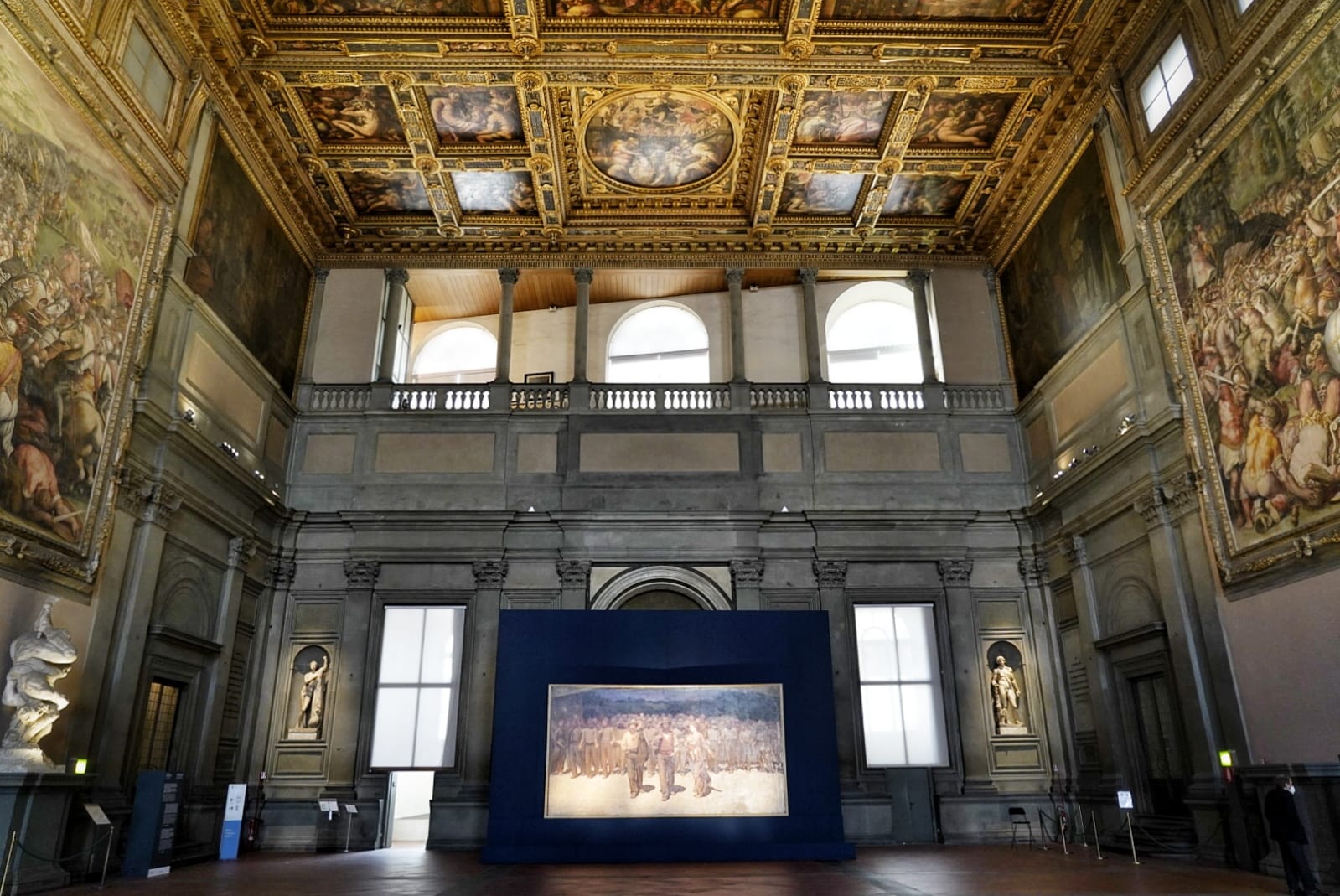 Scientific Coordination Set Up, and Logistics