Fifty years after the memorable exhibition at Forte Belvedere in 1972, Henry Moore returns to Florence. After the great exhibitions Henry Moore. Il Disegno dello scultore and Henry Moore in Toscana, both hosted at the Museo Novecento in 2021, the city pays tribute to the English master with a project created through a repeat collaboration with the Henry Moore Foundation and the BIAF – International Biennial of Antiques in Florence.

Henry Moore in Florence, curated by Sebastiano Barassi, Head of Collections and Exhibitions of the Henry Moore Foundation and Sergio Risaliti, Director of the Museo Novecento, presents two monumental pieces from the great opus of works by Henry Moore (Castleford, 1898 – Perry Green 1986).

From 16 September 2022 to 31 March 2023, Large Interior Form and Family Group will be exhibited respectively in two symbolic places in the city: Piazza della Signoria and, in an exceptional case, in the churchyard of the Abbey of San Miniato al Monte, to interact with the historical and artistic heritage of Florence.

The exhibition adds to those already held in previous years that have seen contemporary art interact with the great monuments of Piazza della Signoria, such as those by Jan Fabre and Jeff Koons, Urs Fisher and Francesco Vezzoli. A curatorial line that has courageously and radically changed the relationship between Florence and modern artistic language, opening the way to fresh new perspectives and leading to other international initiatives. The exhibition also marks a repeated collaboration with the BIAF – International Biennial of Antiques in Florence. 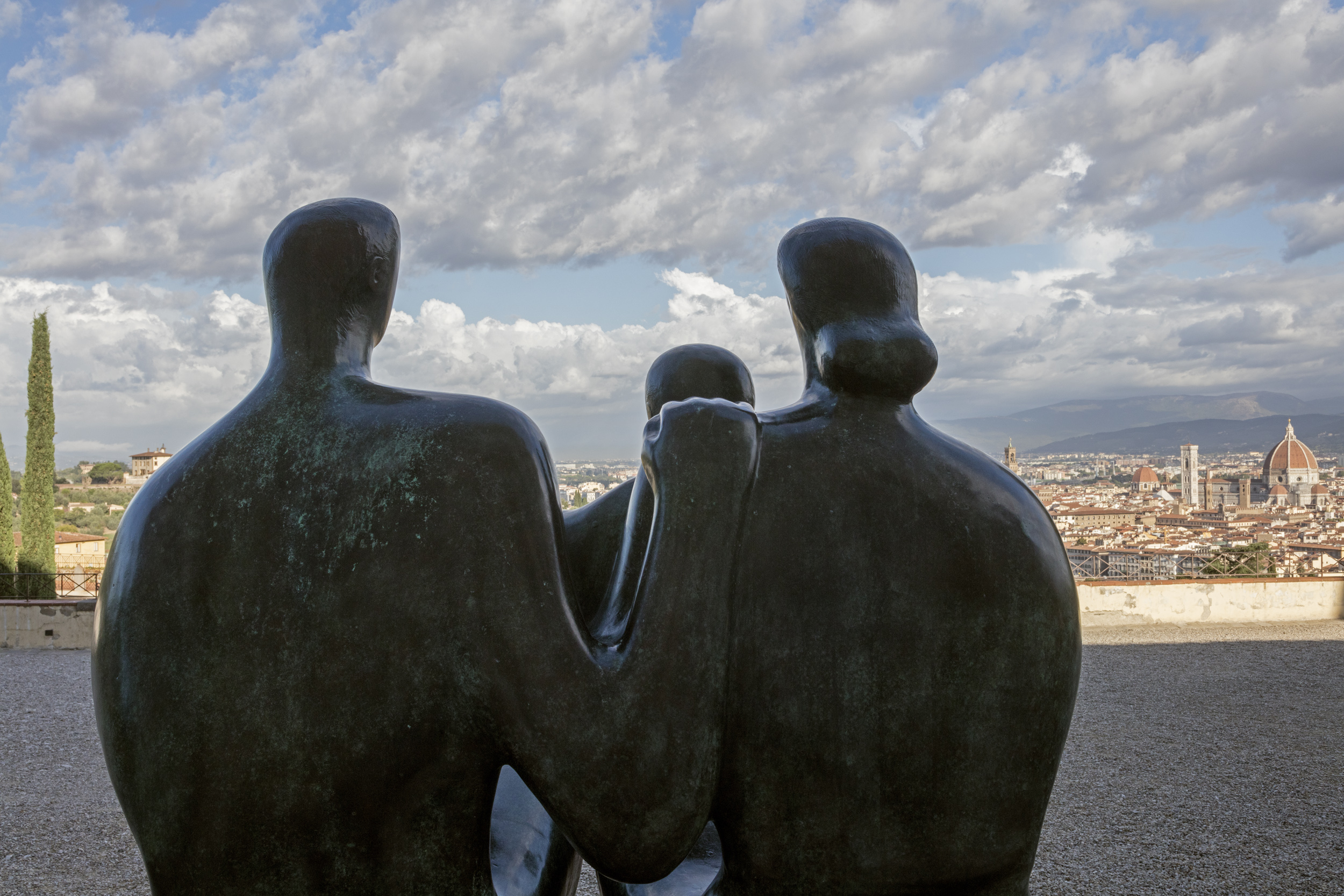 The relationship between Henry Moore and Italy was consolidated over the decades. It began with his youthful revelation over the masters of the Italian Renaissance and the Tuscan primitives, then his participation in the Venice Biennials, the International Grand Prix for Sculpture in 1948, the stays in Versilia from the 1950s and the great exhibitions organised in Rome, Spoleto and Florence in the 1960s and ‘70s, which consecrated his fame in the eyes of the local public.

The study trip he took in 1925 to France, Italy and Germany marked the beginning of this long relationship and was a sort of revelation for Moore: seeing the masterpieces by the 14th and 15th-century Tuscan masters in real life was an experience that stayed with him, guiding his artistic development, along with his study of primitivist and non-European sculpture at the British Museum in London, and the historical avant-garde of the likes of Brancusi and Picasso.

In the two works Family Group and Large Interior Form are two subjects dear to the artist, and those that distinguished all his work: the human figure and the exercise of volume and voids in the forms.

Henry Moore began developing Family Group in 1934, when the architect Walter Gropius asked him to make a sculpture for a new school. The work was completed only after the Second World War, between 1948-49, when it was installed at the Barclay School in Stevenage, England. It was the artist’s first life-size sculpture to be cast in bronze. In the post-war period, when a wave of reconstruction took over Great Britain, Moore was asked to make numerous public sculptures. He developed an interest in the human figure, which became central to much of his work. Following the war and the tragic events that shook the world, there was a desire to counter the dehumanising effects of war. Family Group – metaphorically inspired by the birth of the artist’s only daughter in 1946, Mary – portrays an idealised family group, in which two adults mirror each other while the infant, the cornerstone of the composition, binds them together forming a central pivot. Today this magnificent group is exceptionally welcomed in a symbolic place in Florence, the churchyard before the Abbey of San Miniato al Monte, which dominates the city from on high. 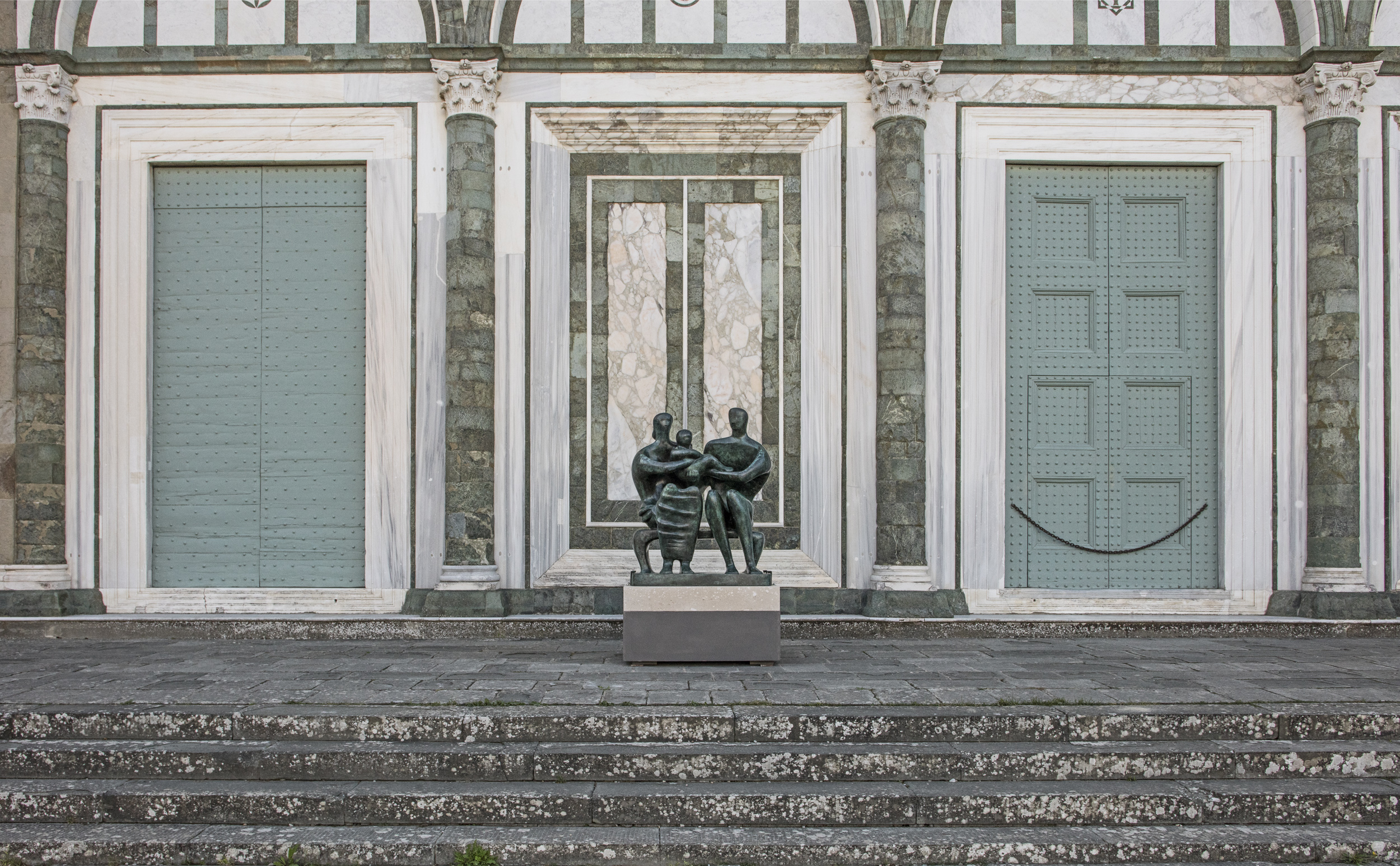 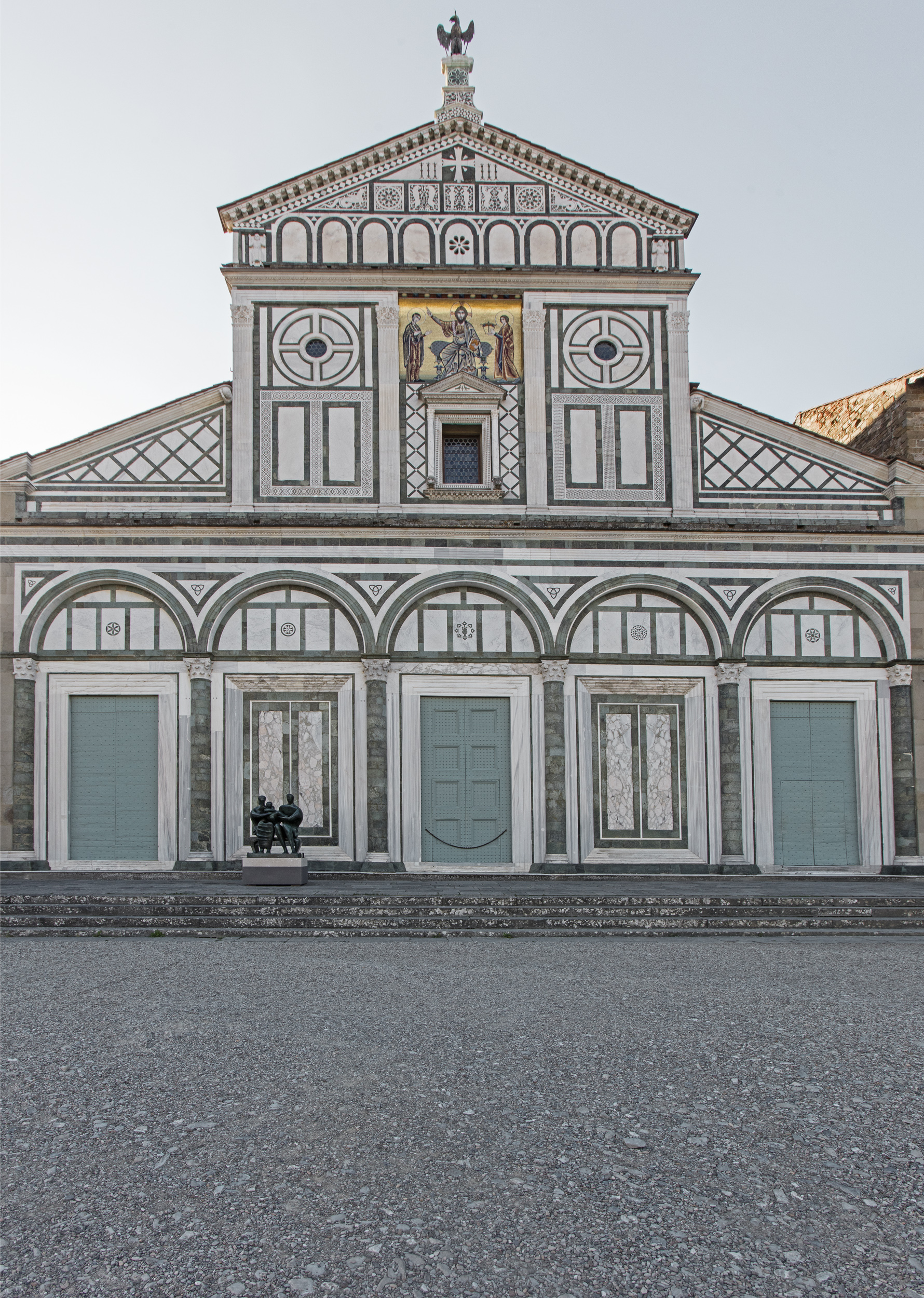 A few years later, Moore began working on another theme, the contrast between the volumes and the voids. With Large Interior Form (1953-54) the artist formally explored sculptural relationships, presenting one form within the other. In fact, the sculpture began as an “internal form” of a larger work, Large Upright Internal/External Form, of the same year. As he often did, Moore took a portion of an existing work and used it as a starting point to develop a new sculptural idea. The presence of large open forms accentuates the organic three-dimensional quality, inspired by some pebbles found by the seashore. The twist and asymmetry of the erect form recall the contrast in classical sculpture, perhaps an echo of the great influence that Renaissance art had on Moore during his career. And it is precisely with the Florence’s great tradition of sculpture that today, Large Interior Form interacts in a privileged spot in Piazza della Signoria in Florence. 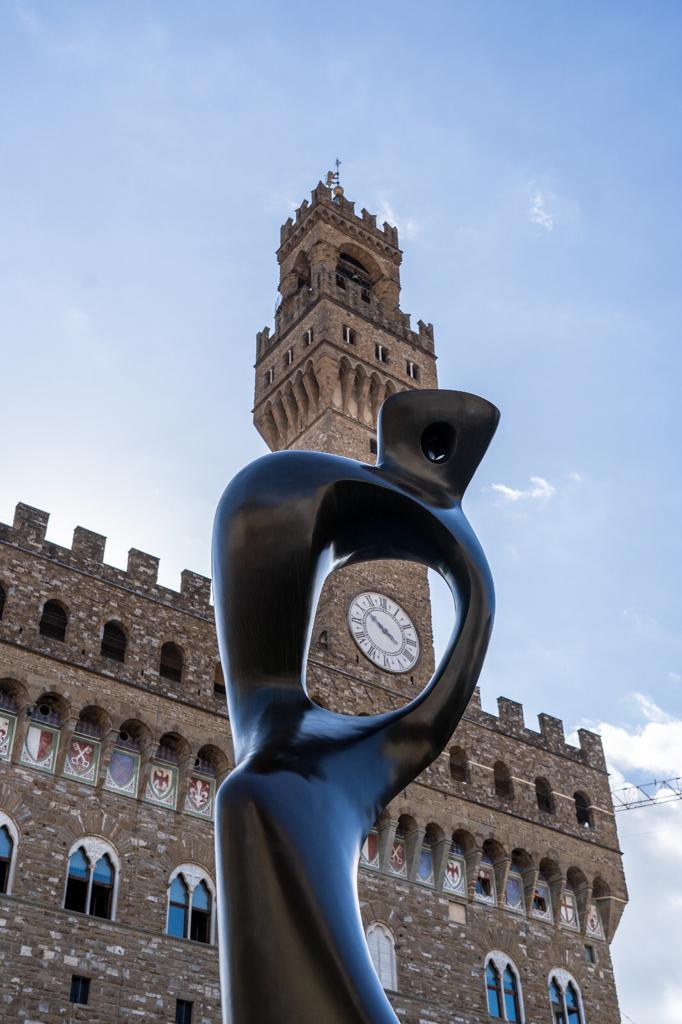 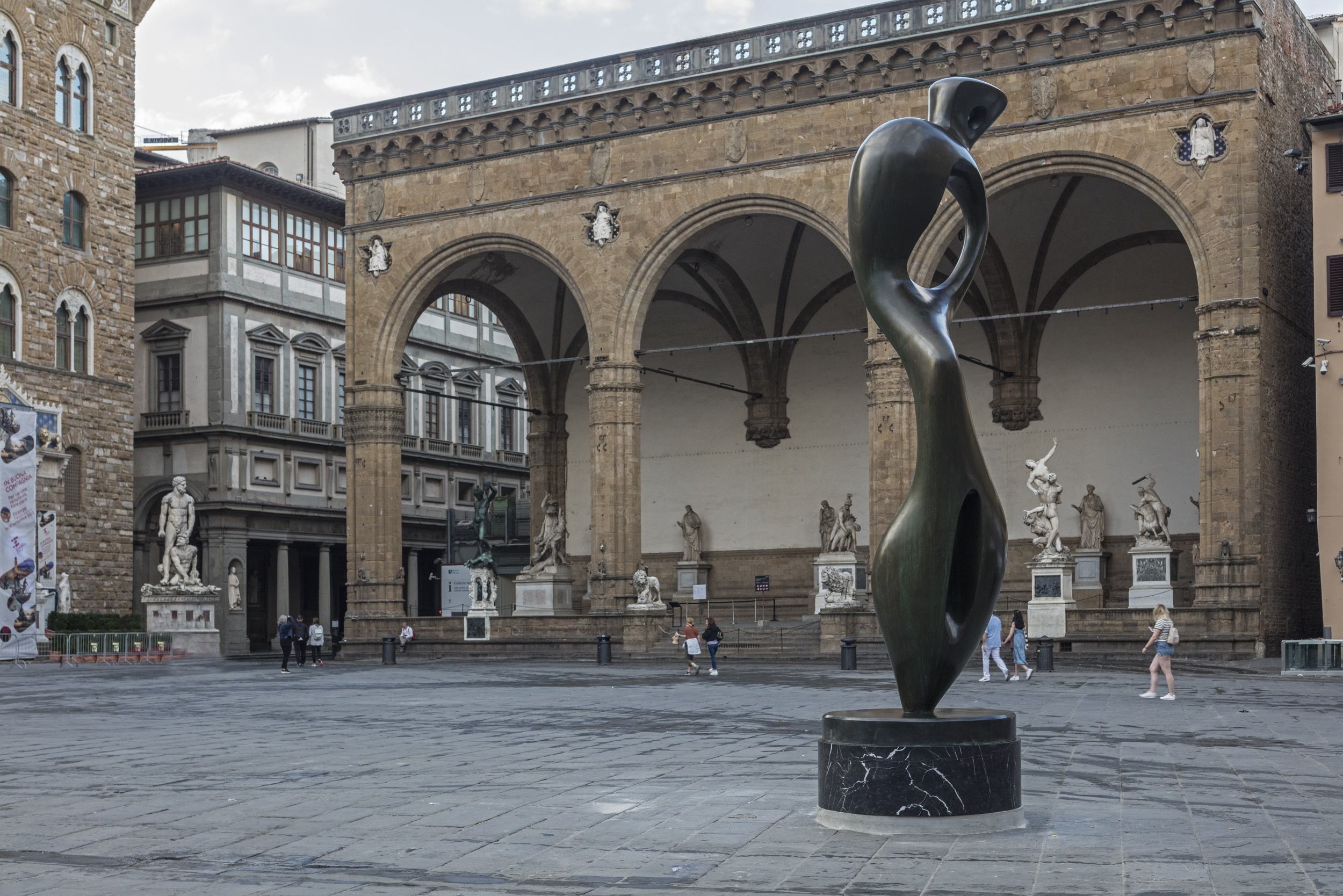