Admission up to 250 visitors at the same time and up to 120 on the first floor. The ticket office closes at 1.20pm.

Among the great masters of Italian art of the twentieth century, Giulio Paolini is the protagonist of an unpublished exhibition project, which brings together works of his most recent production in dialogue with the Renaissance architecture of the rooms on the ground floor of the Museo Novecento.

The title of the exhibition, When is the present?, curated by Bettina Della Casa and Sergio Risaliti, is taken from a letter written in 1922 by Rainer Maria Rilke to Lou Andreas Salomè, and constitutes the starting point from which Giulio Paolini traces his own meditation about time and our inability to grasp it, combining questions about the role of art and the figure of the artist with those about existence and its flow. The works on display, at the center of a path conceived by the artist himself, interact with the Renaissance architecture of the rooms on the ground floor of the Museo Novecento, inviting us to take a journey into his latest reflections on the meaning of artistic creation and on the its multiple implications. 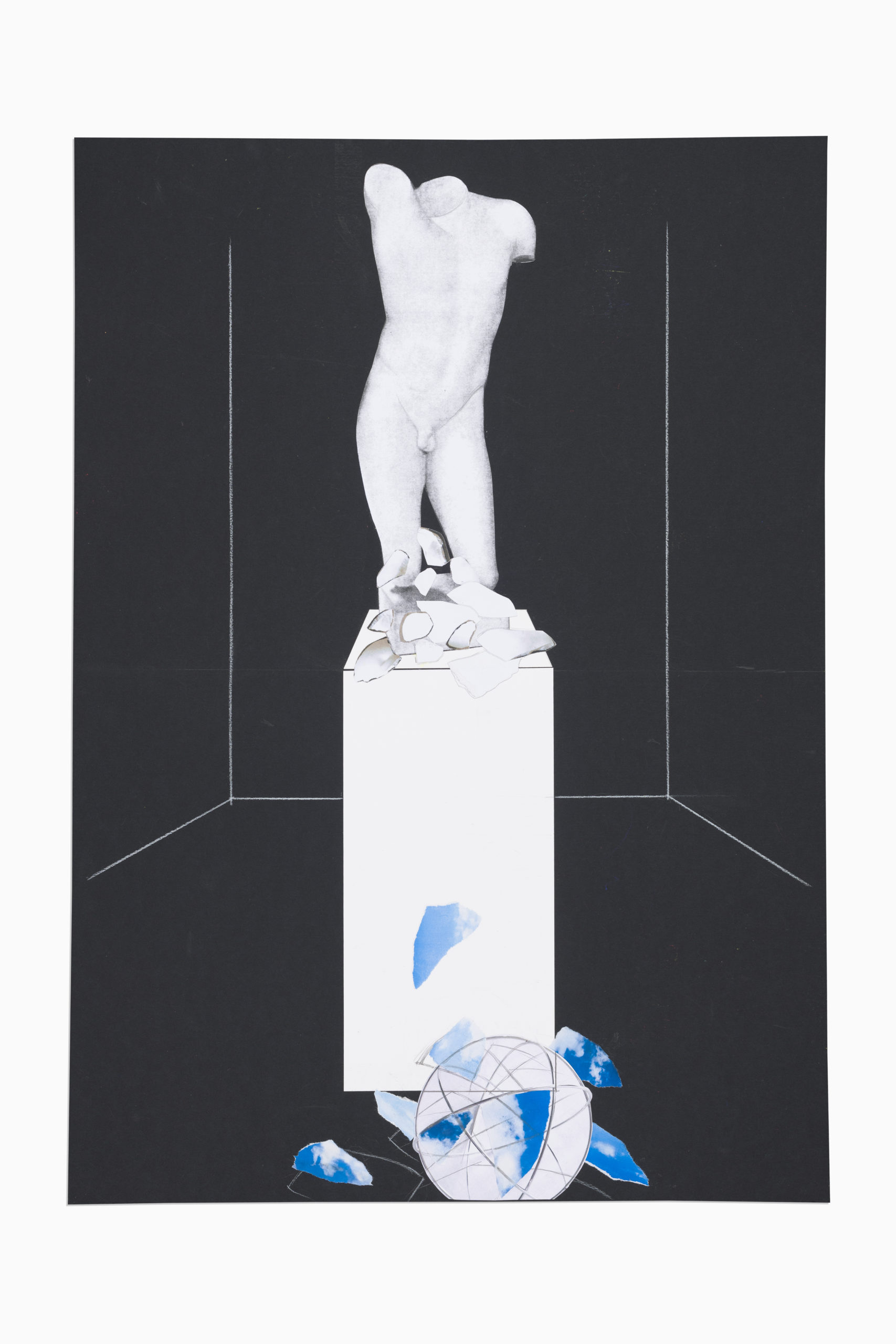 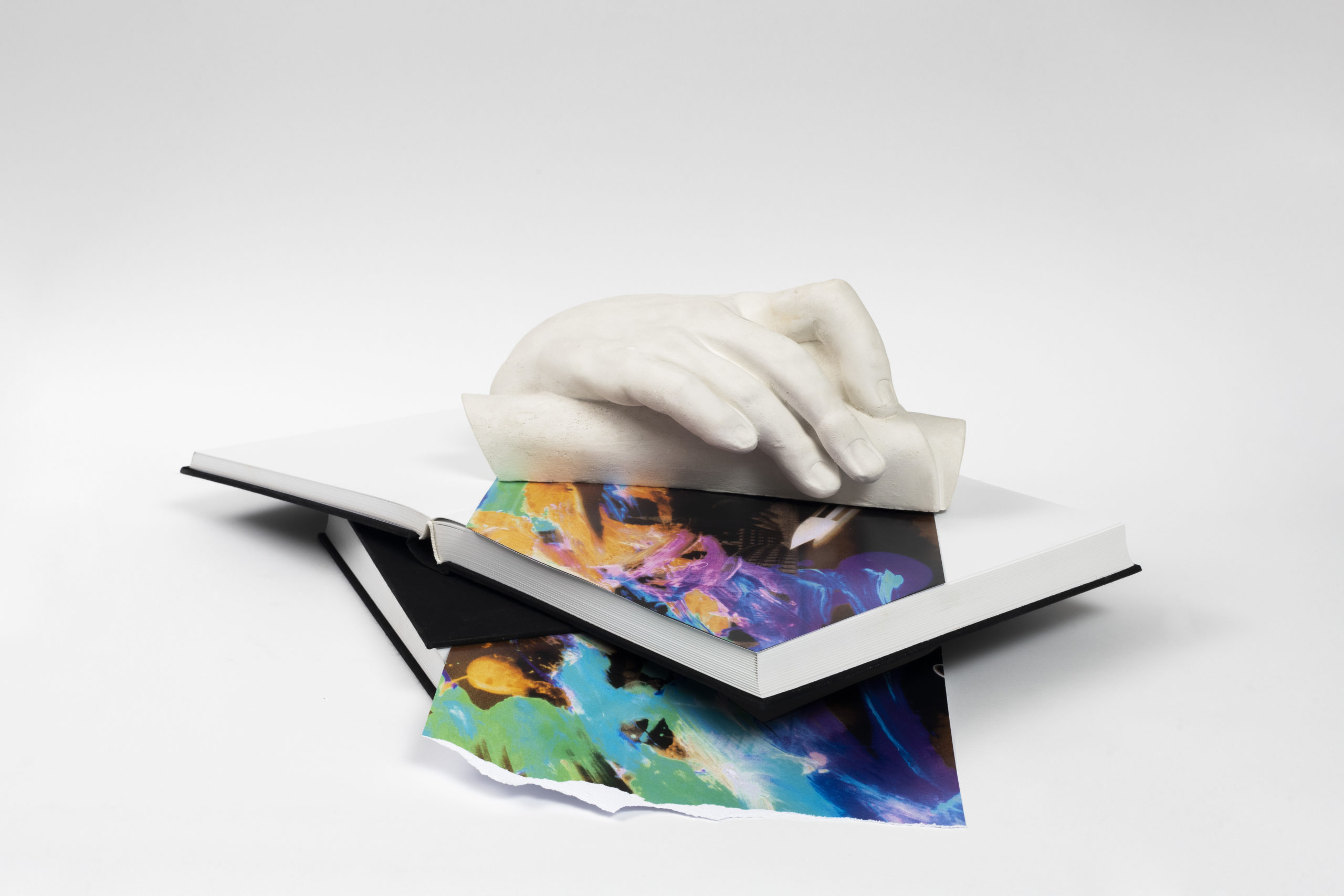 With the particular refinement that has always characterized his work, Paolini introduces us to an ‘other’ dimension, touching some of the most hidden and vibrant strings of the human soul. As in an incessant game of mirrors, the observer – with his own baggage of aspirations, fears, passions – is directly called into question by the unfolding of drawings, collages, installations, which redefine space and our ‘pace’ within it. 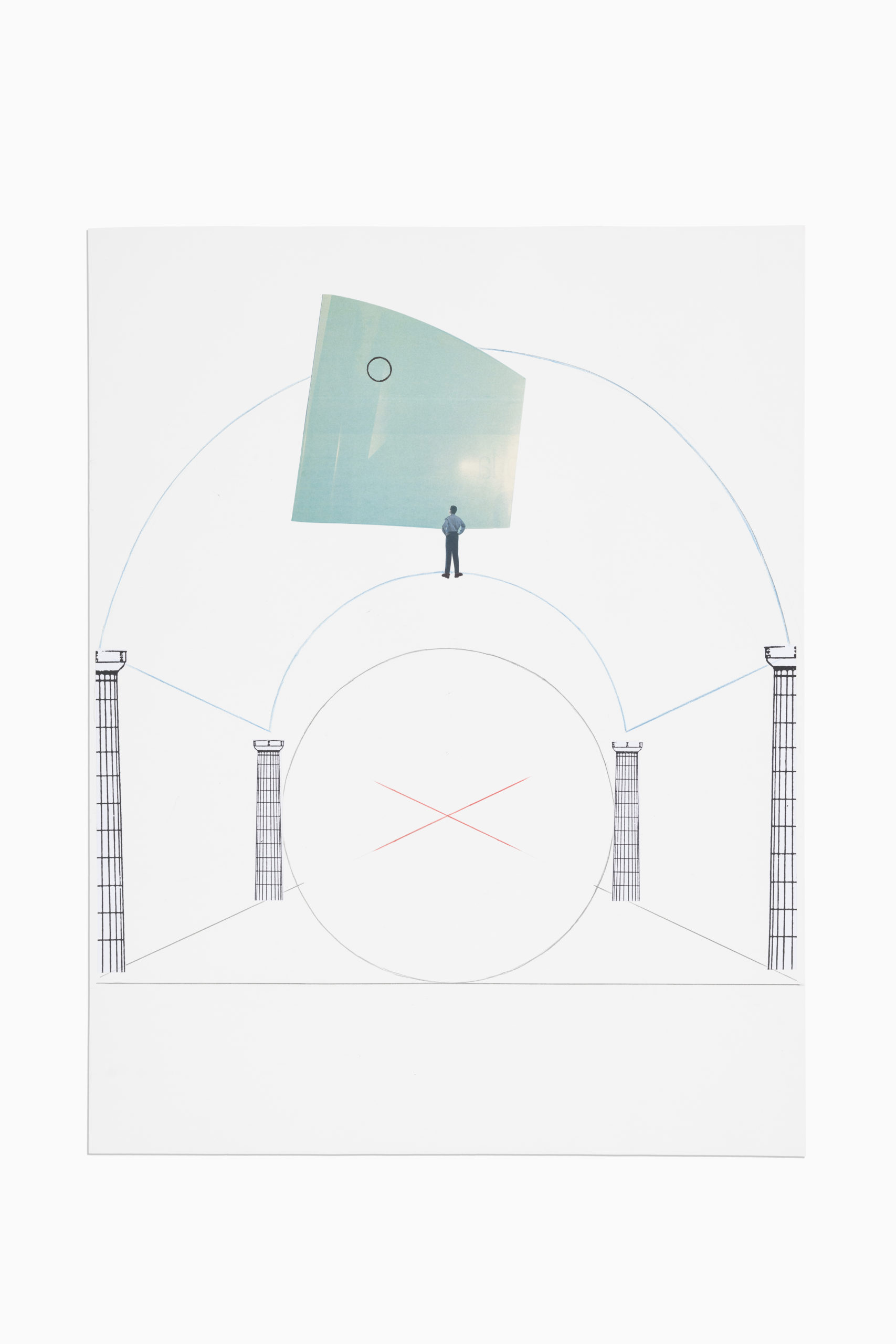 «Art happens», Paolini usually remembers, quoting Whistler in the words of Jorge Luis Borges. The wonder of art, its unconditional manifestation, ideally unite the artist and the observer, called to participate in an incessant search for meaning, in a game of references often tinged with irony. The works do not convey reflections on news and worldliness, on our troubled society, on the facts and misdeeds of globalization: in them the amazed encounter of the artist with art itself is manifested, a process that is placed in our time but which it is, inevitably, outside it, overcoming every contingency, as belonging to a metaphysical dimension. 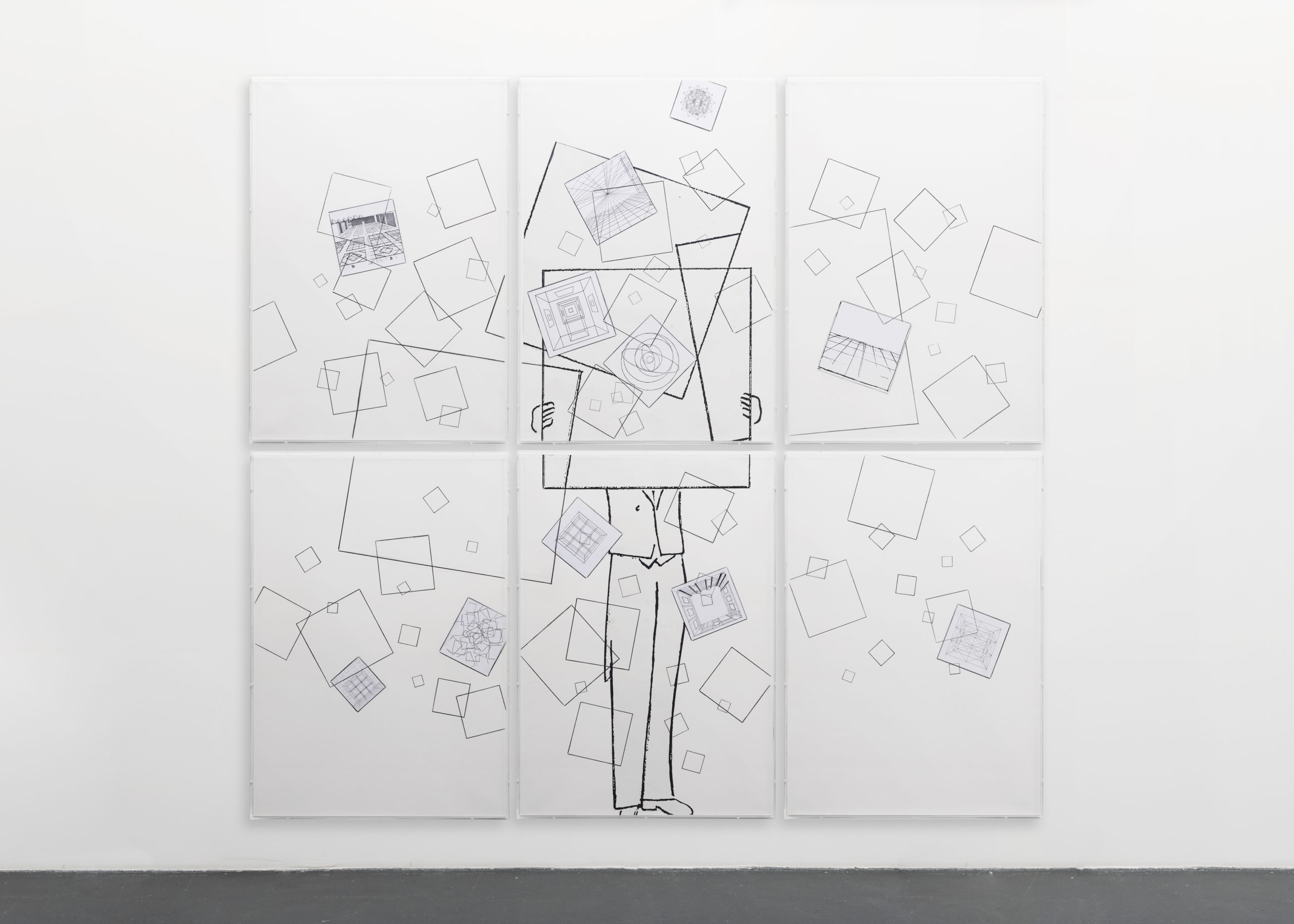 The video recording of Teorema, a ballet inspired by the novel of the same name by Pier Paolo Pasolini, staged at the Teatro del Maggio Musicale in Florence from 28 April to 6 May 1999, is shown in the museum’s cinema room. Taking up the “challenge to the impossibility of the story” offered by the Pasolini text, Giulio Paolini had created an essential scenography, whose geometric rigor dialogues with the physicality of dancers dressed in contemporary clothes.

With the installation The abandoned painting, present in one of the rooms on the ground floor of the museum, the outlined figure of a young woman is represented. It is the upside-down silhouette of the sleeping Ariadne, whose iconography has its roots in classical statuary, becoming a source of inspiration for artists and writers over the centuries. The figure appears lying on the shore of Lake Nemi, which takes its name from a sacred wood formerly dedicated to the cult of Diana, a divinity of the Roman pantheon usually assimilated to the Greek Artemis. By the hand of the latter, according to one version of the myth, Ariadne was killed. The representation of the small reservoir, which takes the shape of a palette, is therefore linked to the events that have had the young woman as its protagonist, one arm of which seems to support the large frame leaning against the wall, with a corner resting on the ground. At the top, at the upper end, the wooden structure is wrapped by the flap of a long prepared canvas that falls to the floor. Like a large “abandoned” painting, the work confronts us with the enigma of a betrayed ‘vision’, (as was Ariadne in the myth: betrayed and abandoned by Theseus after helping him to get out of the labyrinth following the killing of the Minotaur).

Like a large “abandoned” painting, the work confronts us with the enigma of a betrayed ‘vision’ (just as Ariadne was betrayed in the Greek myth). “Art – suggests Paolini – is the imitation of a model that is not given. Art is the imitation of art and does not say, because it does not know, what it wants to adhere to, which model is to be discovered”. The work therefore preserves “the intact and still secret material of its becoming”, making vain any attempt to interpret it and bring it back to a model.

The works presented at the Museo Novecento are complemented by a collage on an easel exhibited at the Convent of San Marco, which has always been considered by the artist to be his ideal museum. Noli me tangere, the work inspired by the homonymous fresco by Beato Angelico, places us in front of the emptiness that arises from the search for a constantly missed contact, giving life to a comparison with the luminous and light perfection of the painting of the Dominican friar, sought by Paolini since the beginning of his career. 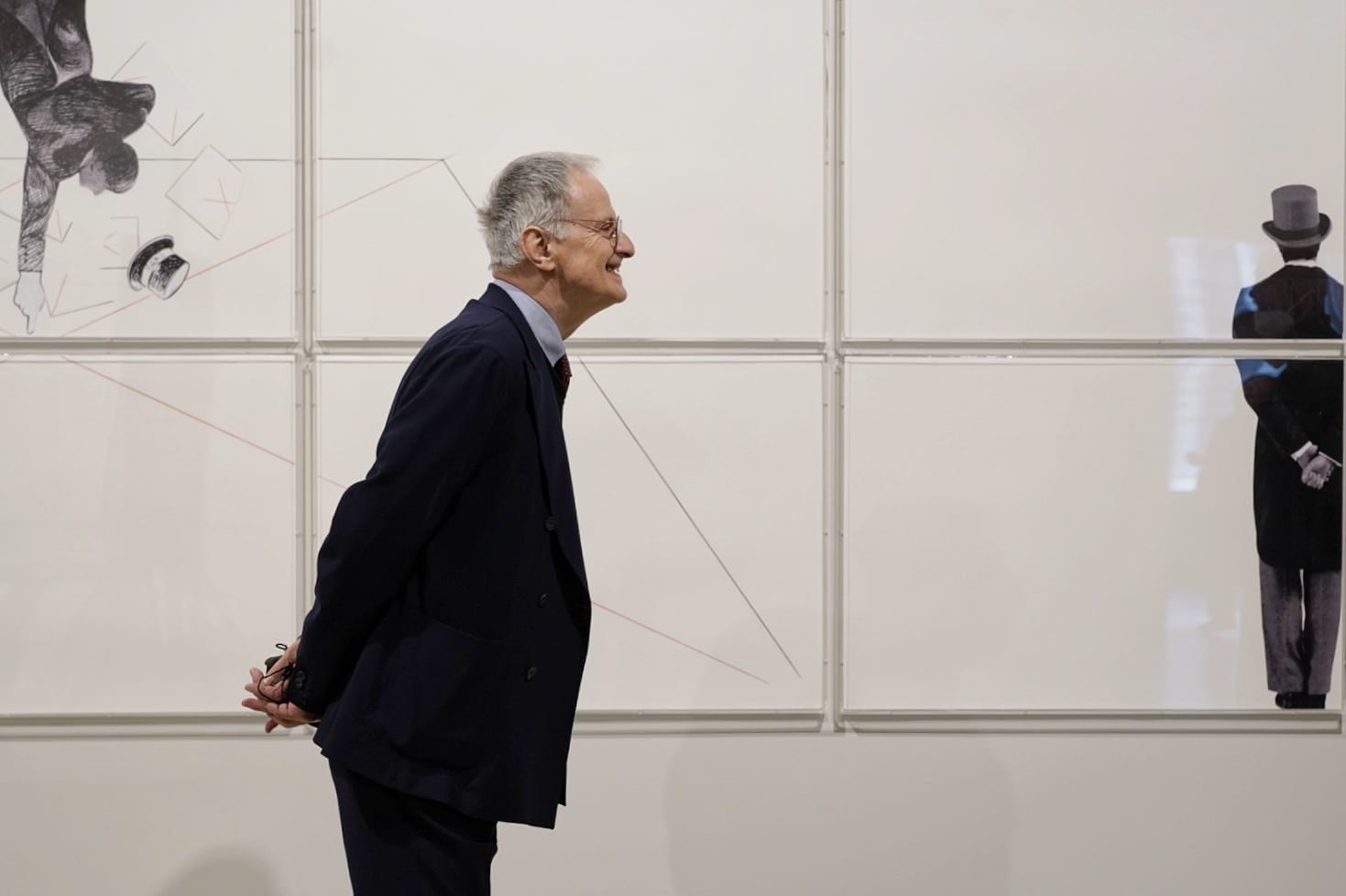 Born in Genoa in 1940, Giulio Paolini lives and works in Turin. As soon as he was twenty, he arrived at the definition of a completely original style, as revealed by Geometric Design, a canvas painted in white on which an ink squaring is traced. The work, created in 1960, is considered by the artist himself as a permanent point of reference in his production. In fact, his reflection on the space of representation and the status of the work of art begins to take shape.
Paolini’s works call into question the tools of artistic making, the figure of the author and his relationship with the work and with the observer, in a research that draws nourishment from the history of art itself: from the birth of the Renaissance perspective to the survival of the myth in iconography, to the perpetuation of classical models.
At the end of the sixties he took part in the manifestations of the Arte Povera movement, settling on a position of tendential autonomy. Freeing himself from any conditioning of the dominant culture, in the years of contestation and commitment he became the spokesperson for an art far from social and political claims, dwelling on the enigma of vision, on the elusive relationship between art and object, on the elusive definitions of time and space.
Paolini questions the very value of creation and representation, expressing his own investigation in sophisticated formal and conceptual constructions. The perspective, the theme of the double, the theatricality of the staging characterize his mature production, in which innumerable references of an artistic, literary and philosophical nature are deposited and relived.
As Maddalena Disch recalls: «Among the main characteristics of his operating mode are quotation, duplication and fragmentation, used as expedients to stage the distance from an accomplished model and to make the work a “theater of evocation”. These visual procedures that draw on a vast repertoire of literary, mythological and philosophical references, evoked through photographic reproduction, collage and plaster cast, are complemented by articulated and composite installations, centered on additive dynamics (seriality, repetition, juxtaposition ), centrifugal (explosion and dispersion starting from the center) or centripetal (concentration, overlapping, interlocking)».
Protagonist of important exhibitions in galleries and museums all over the world, since the beginning he has also associated his artistic practice with a literary research, as revealed by the emblematic reflections collected in several books, including Idem (1975), Contemplator enim (1991) , Painting lesson, Black Out and Boa (1992-1998), The truth in four lines and ninety-five voices (1996), Four steps. In the museum without muses (2006), From the Atlas to the Void in alphabetical order (2010) and The author who believed he existed (2012). 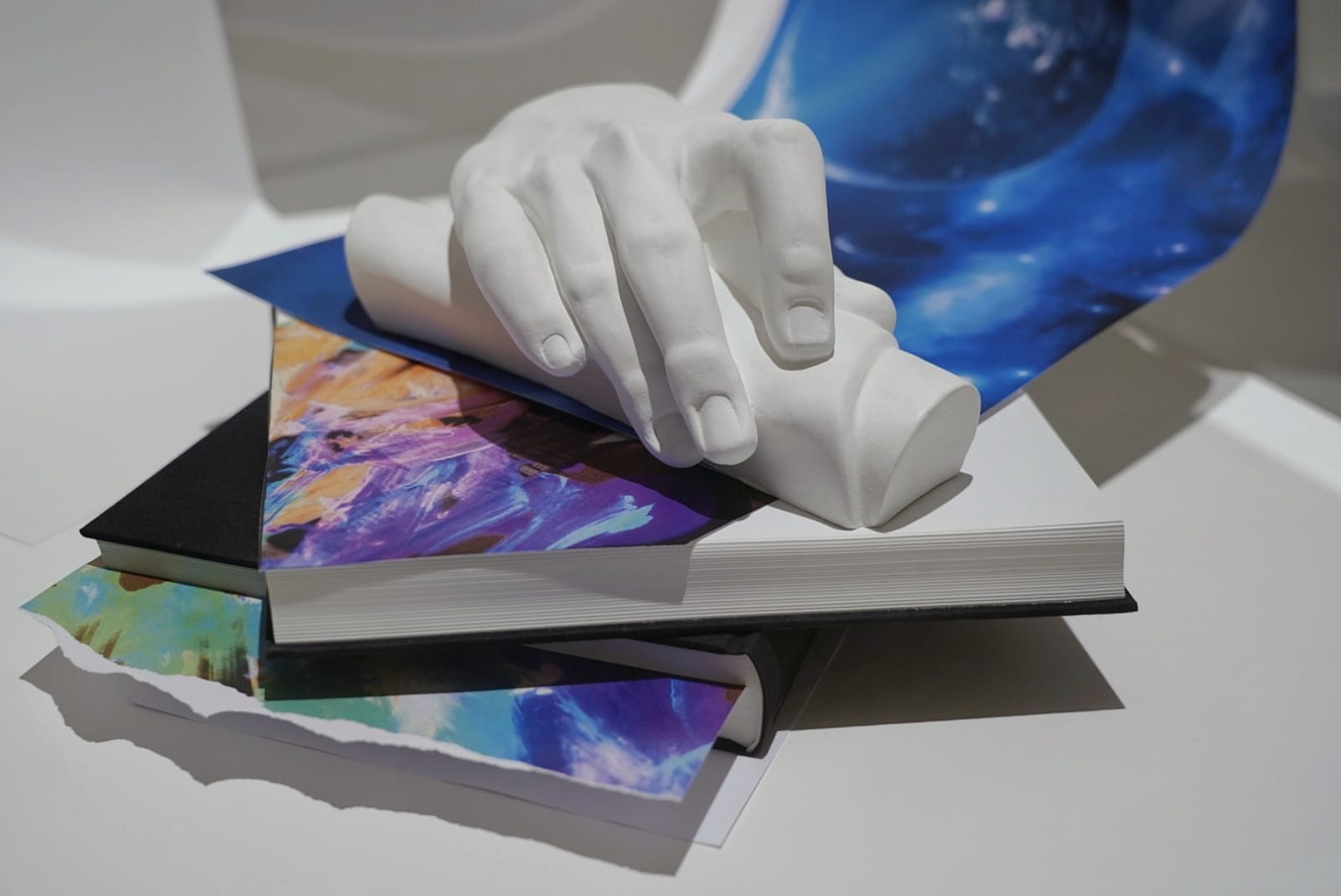 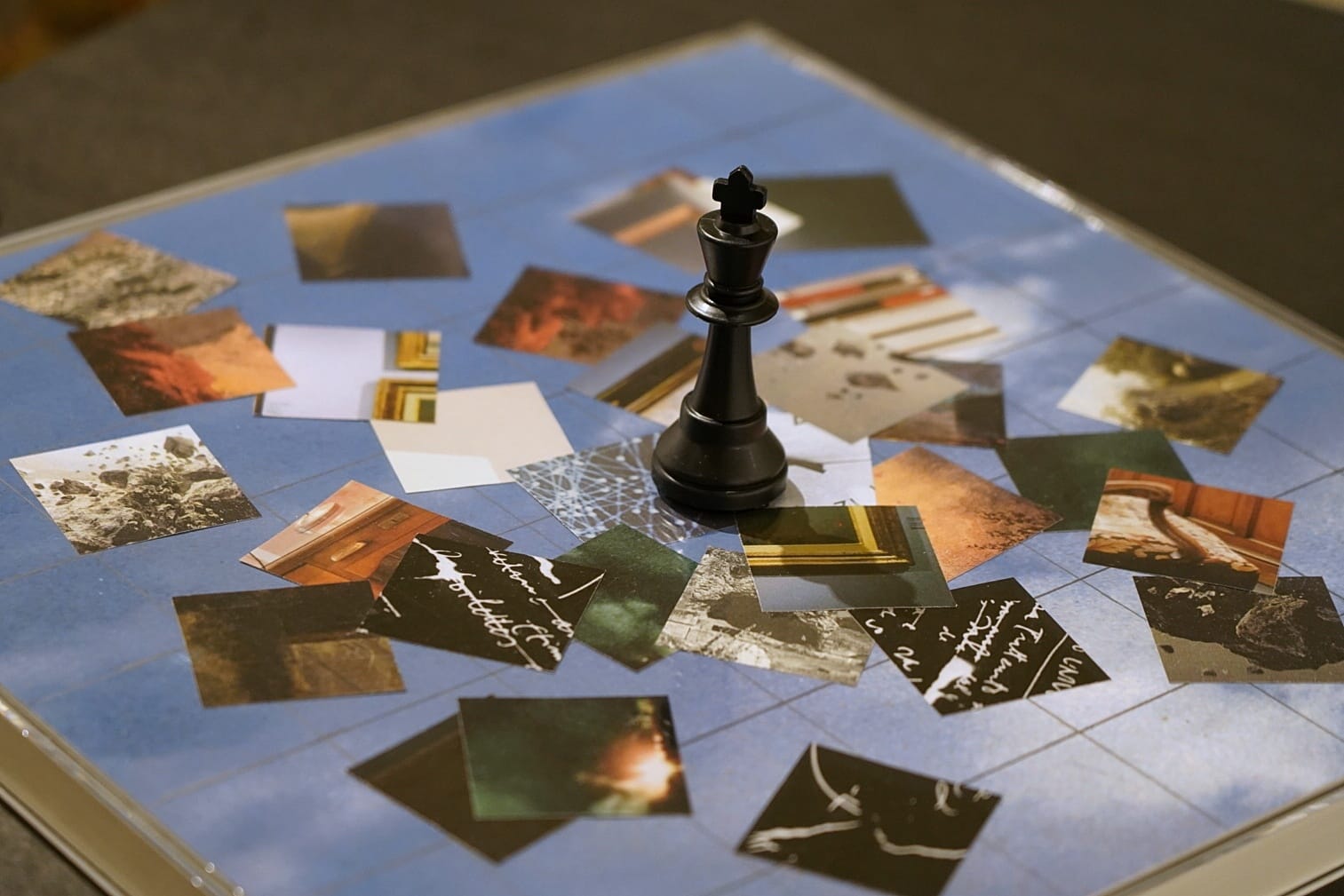 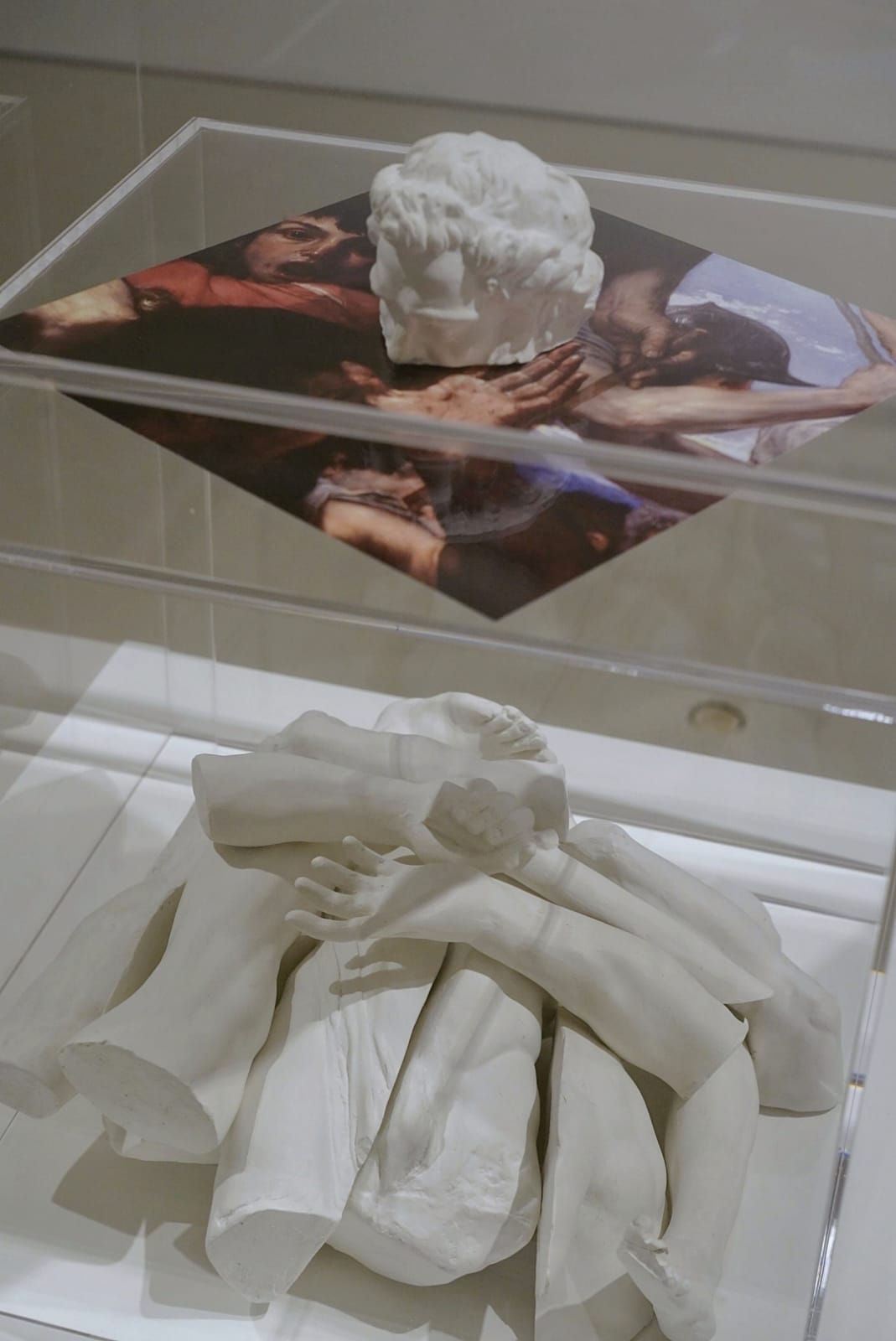 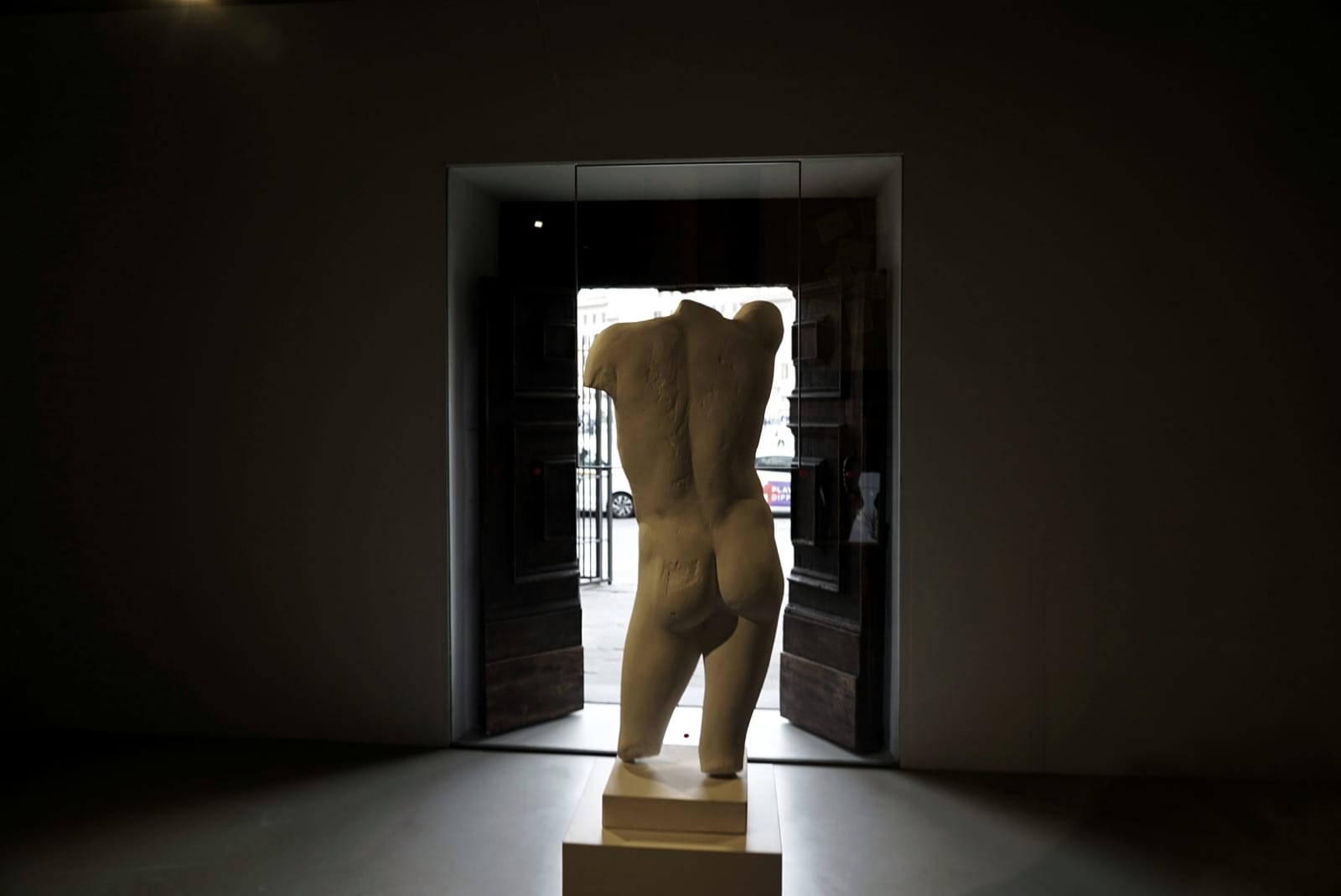 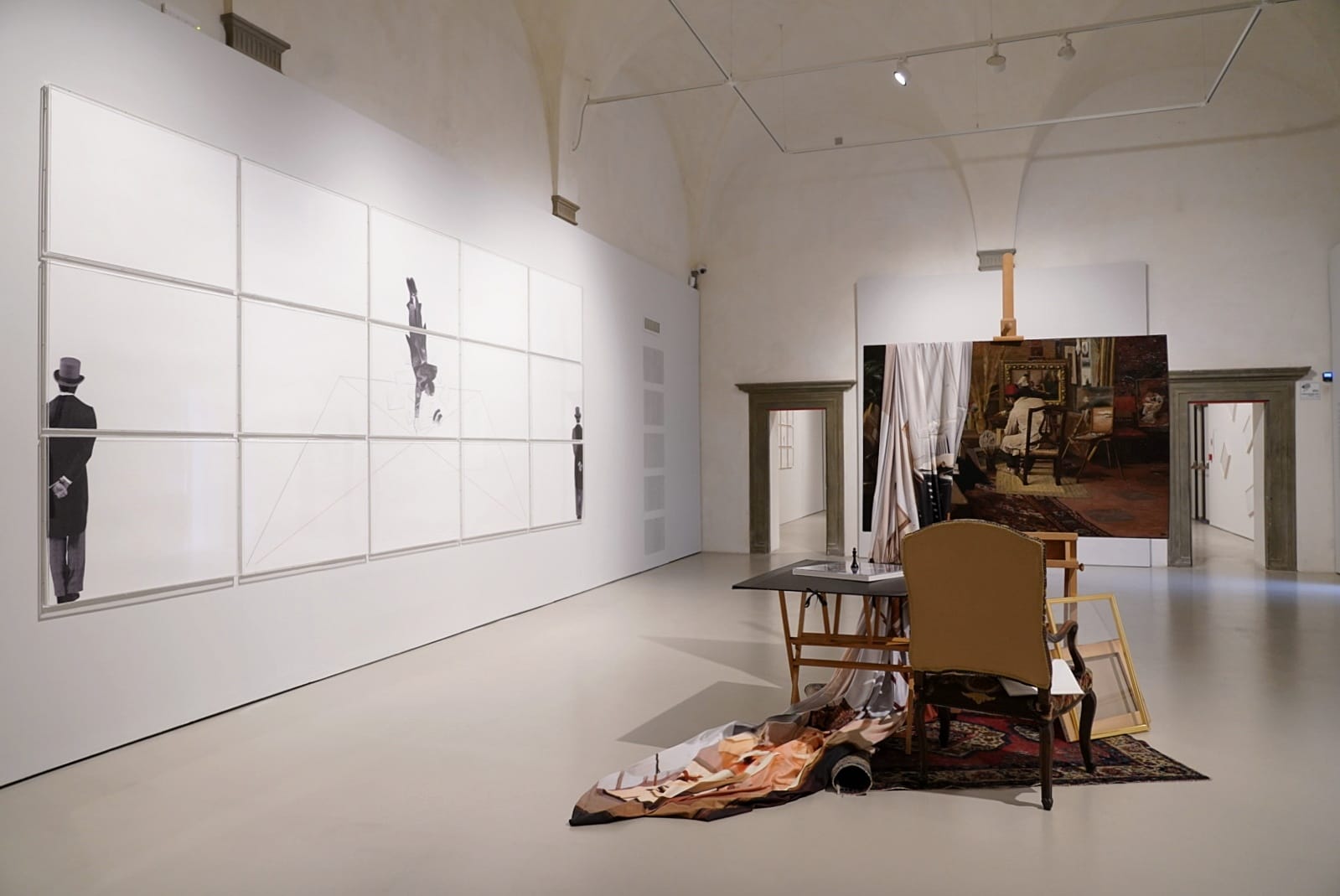 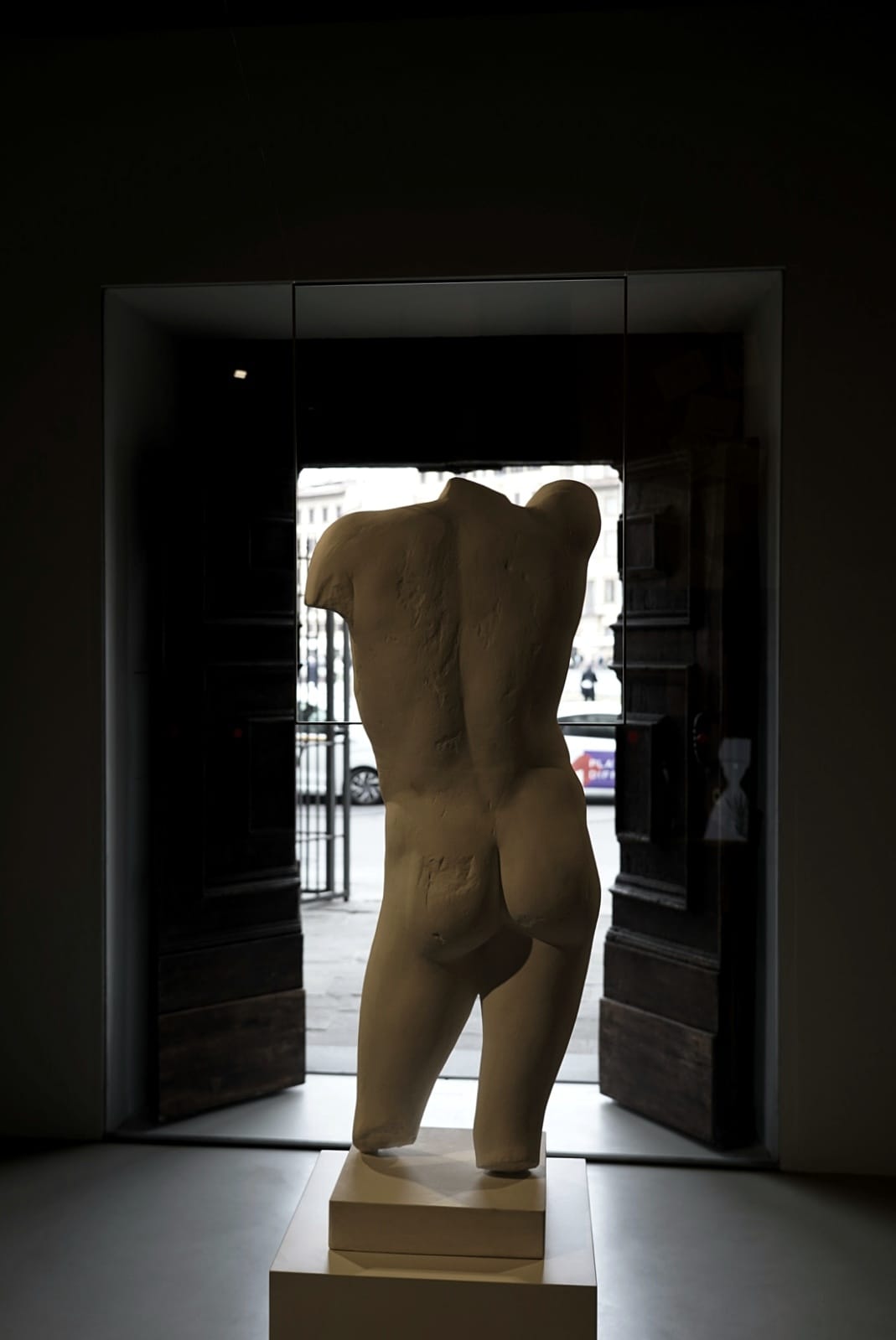