The large luminous sign will transform the facade of the Museum into a border space, an ideal diaphragm that relates the visual contents normally kept inside the building, with the square and the public space outside.

We are with you in the night is the title of the large LED that the international artistic collective Claire Fontaine will install on the external facade of the Museo Novecento on the occasion of F-light – Firenze Light Festival, from 12 December 2020.

We are with you in the night lights up in an ethical sense dialectically marking the contrast between the weight of the night and the luminous force of sharing. 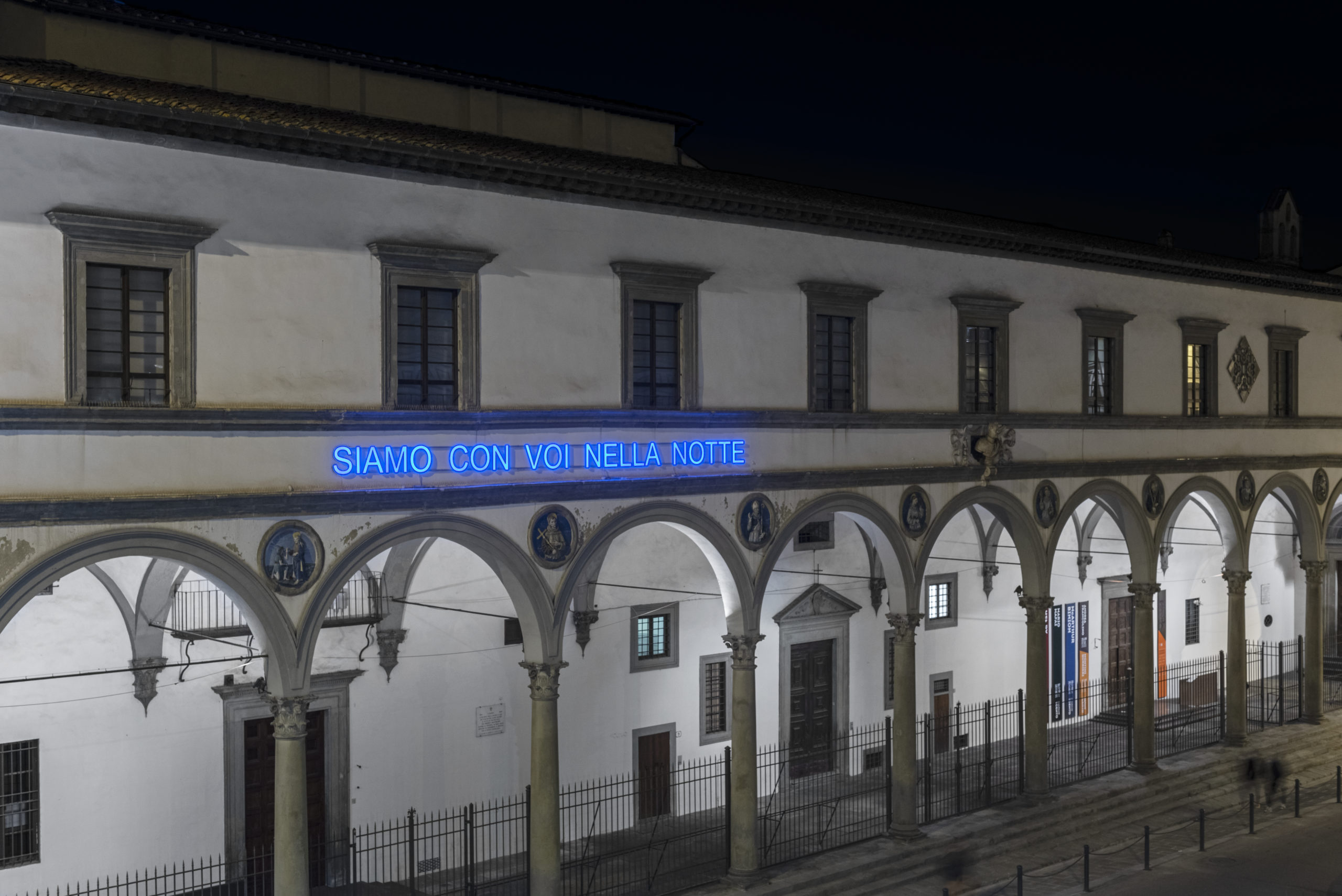 This is the second of the three interventions by the artistic couple at the Museo Novecento, after the first made on the occasion of the International Day for the Elimination of Violence against Women, on November 25, and the third scheduled for January 27, on the occasion of the of Memory. A new form of personal exhibition divided into three parts with the upstream decision to occupy the public space at a time of the year when physical sharing is limited to a maximum due to the pandemic. The Museo Novecento responds with these three artistic actions to the historical moment and connects with the city community with works of strong political significance.

The inscription We are with you in the night (2008) is inspired by the murals that appeared in the seventies on the walls of various Italian cities as a sign of solidarity towards political prisoners. The meaning of Claire Fontaine’s work, however, goes beyond the original spirit with which the writing was conceived during the Years of Lead: “The night” in this case represents yes, the prison but also the darkest dimension of fear and despair, when the forces of resistance, singular and plural, those of mutual compassion shed light: a perfect works to describe the moment we are living in, of isolation and darkness, and in which the light at the end of the tunnel can be imagined thanks to the visionary capacity of art, as a space of freedom and as a revolutionary gesture.

Claire Fontaine’s neo-conceptual art often recalls works by other artists or, as in this case, re-elaborates iconographies that are part of our collective visual baggage and is formalized through various mediums, such as neon, photography, video, text, painting, sculpture. His practice can be described as a continuous questioning of political impotence and the crisis of singularity that define contemporary society. Working in parallel both on the image and on the language, Claire Fontaine elaborates an artistic poetics that develops on the double track of the work and the text. 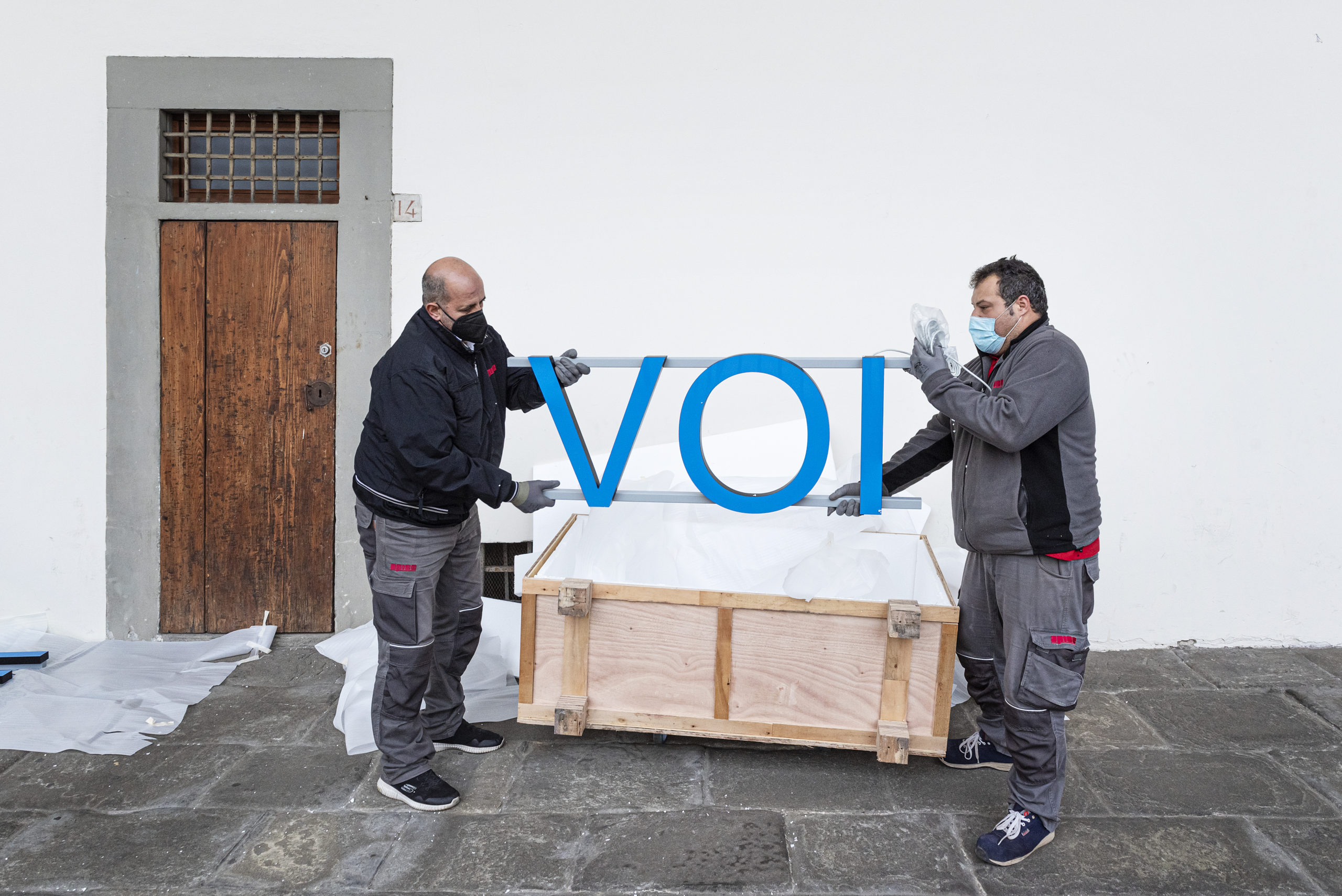 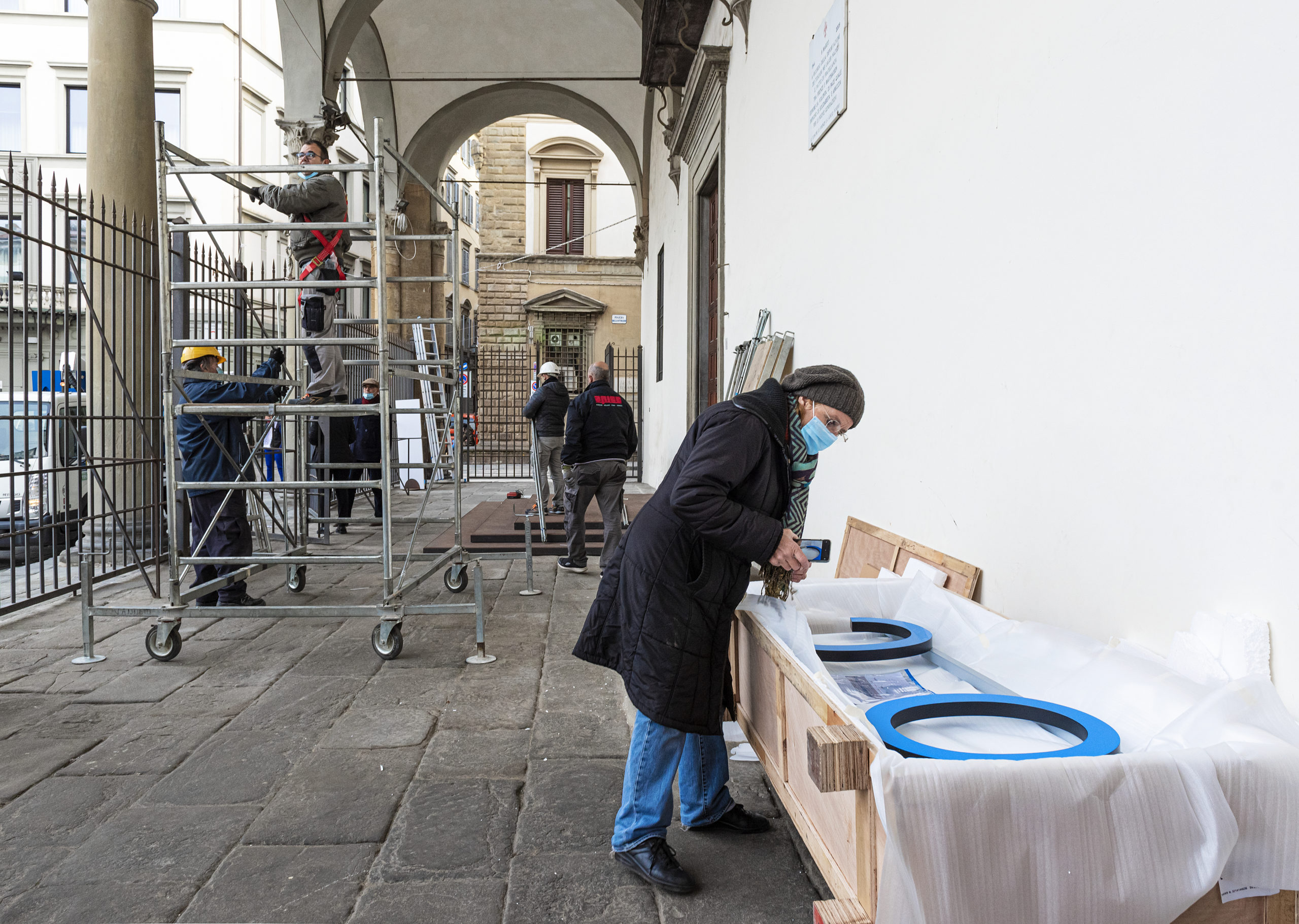 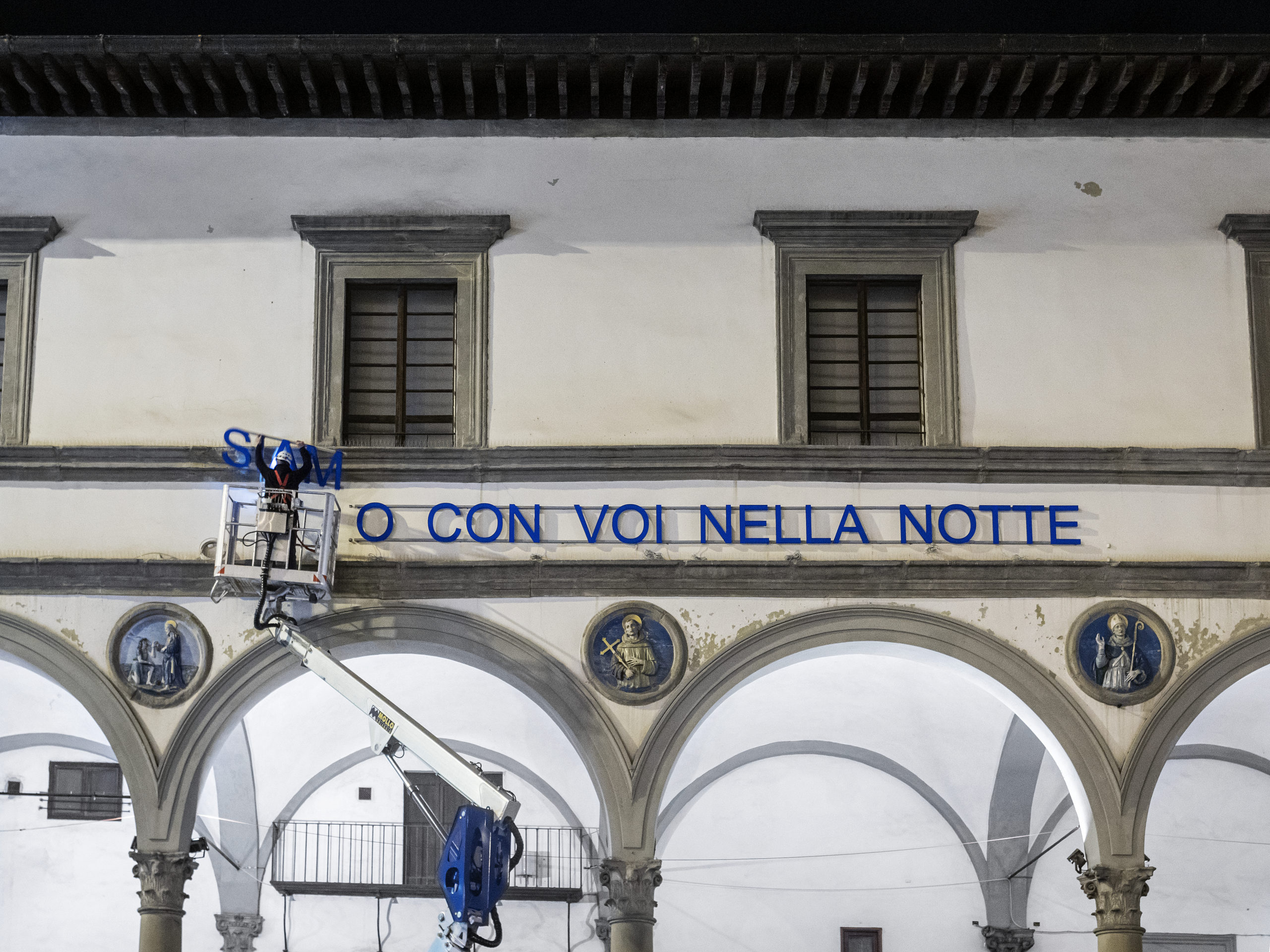 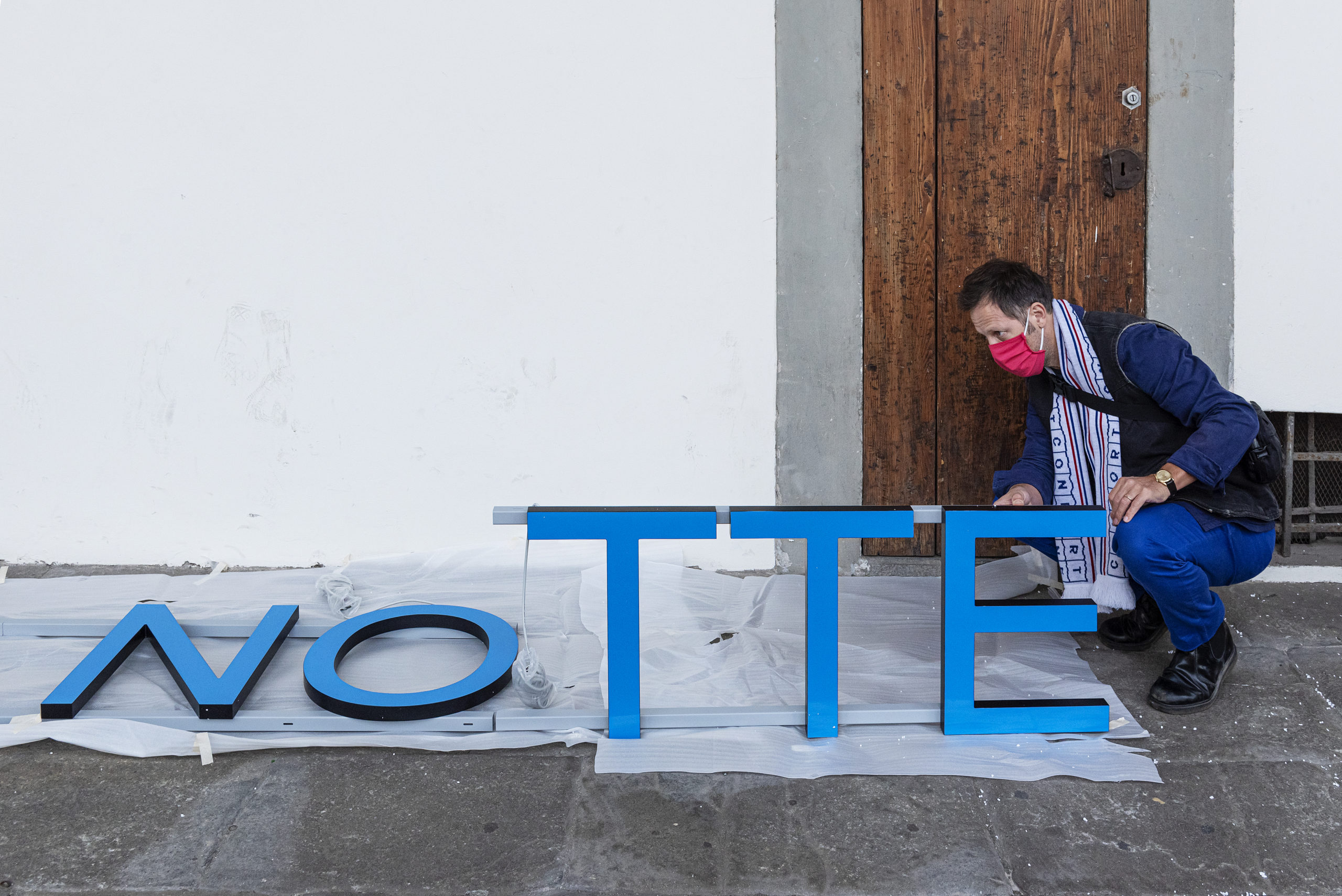 Claire Fontaine is a collective artist founded by James Thornhill and Fulvia Carnevale in 2004 in Paris. Since 2017 he lives and works in Palermo. Her name is a pseudonym that sounds like the proper name of a French woman. The two artists chose it inspired by Duchamp’s urinal (Fontaine) and a well-known French stationery brand (Clairefontaine) deliberately wanting to create the misunderstanding, so that their biographies were not directly associated with the works, so as to be able to transform the I work in a space of freedom. The use of quotation and piracy is linked to the same intention: Claire Fontaine’s practice does not focus on individual genius and the excellence of individuals but seeks the activation of the forces and forms present in the history of art and emphasizes the their political content. For the artist, there is a value in using images which is their power to set our bodies and thoughts in motion, to illuminate the sensitive. Claire Fontaine uses various mediums and rejects the obligation of formal recognition in her work, which instead she considers as an experimental research in progress, a continuous exploration. He uses video, sculpture, luminous texts often in neon, painting and both literary and non-fiction writing.
Among his publications we remember the anthology The human strike and the art of creating freedom, Derive Approdi, 2017, translated into French for Diaphanes, 2019 and in English for Semiotext (and) the artist’s books: with Some instructions for the sharing of private property, One Star Press, 2011 and Vivre, vaincre, Dilecta, 2009.
Two monographs have been published on the artist by Koenig Books, Newsfloor, 2020, with texts by Anita Chari and Jaleh Mansoor and Foreigners Everywhere, 2011, with texts by L. Ragaglia, Bernard Blistène, Nicolas Liucci-Goutnikov, John Kelsey, Hal Foster .
A selection of solo exhibitions include Your Money and Your Life, Galerias Municipais, Lisbon, 2019; The Stock Exchange and Life, Palazzo Ducale, Genoa, 2019; Les printemps seront silencieux, Le Confort Moderne, Poitiers, 2019; #displaced, Städtische Galerie Norhdorn, Nordhorn, 2019; Fortezzuola, Pietro Canonica Museum, Villa Medici, Rome, 2016; Tears, Jewish Museum, New York 2013; 1493, Espacio 1414, San Juan, Puerto Rico 2013; Sell ​​Your Debt, Queen’s Nails, San Francisco 2013; Redemptions, CCA Wattis, San Francisco, 2013; Carelessness causes fire, Audian Gallery, Vancouver 2012; Breakfast starts at midnight, Index, The Swedish Contemporary Art Foundation Stockholm 2012; M-A-C-C-H-I-N-A-Z-IO-N-I, Museion, Bolzano, 2012; P.I.G.S., MUSAC, Castilla y León2011; Economies, Museum of Contemporary Art, North Miami 2010.